Industry experts and players alike will voice their opinions at the upcoming iGaming North America conference, held in Las Vegas. 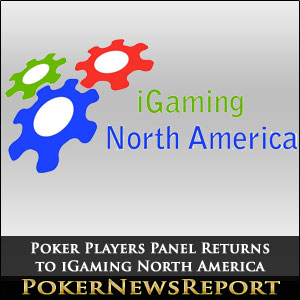 Industry experts and players alike will voice their opinions at the upcoming iGaming North America conference, held in Las Vegas.

For the second consecutive year, prominent poker players will have the opportunity to relay their own experiences and opinions to some of today’s top Internet gambling figures.

The iGaming North America (iGNA) conference is arguably the most prestigious and anticipated online gambling event of the year. This year’s event will feature over 40 panels and other noteworthy happenings, most of which will either serve to educate the poker community or in some way advocate the continued push for regulated online poker.

Somerville has made a name for himself both on and off the green felt. As a player he’s won a WSOP bracelet and boasts four WSOP final tables. He’s also a feared Internet player, amassing a small fortune in online winnings. When away from the green felt, Jason acts as a true ambassador for the sport. Representing Ultimate Poker as a Team Pro, poker’s first openly gay male player has gained a reputation for his helpfulness, pleasant demeanor, intelligence and general likeability.

Deeb is a formidable live and online tournament grinder boasting over $5 million in tournament scores. Somerville and Deeb will also be joined by Danielle Andersen, another Ultimate Poker Team Pro who earned notoriety through her appearance in the poker doc “Bet, Raise, Fold.” Rounding out the panel is a lesser known commodity in the poker biz, semi-professional poker player and physician Dominic L. Ricciardi, MD. Ricciardi, like others living in Nevada and New Jersey, is now able to earn extra funds grinding it out from the comfort of his own home.

This will be the second year the player’s panel will be featured at the iGNA. Last year’s panel was headed up by Marco Valerio. Known by his Twitter handle @AgentMarco, Marco has proven extremely active in the iGaming landscape and both an industry reporting and through his own blog at agentmarco.com, which details happening in the regulated iGaming space. This year, Valerio will be moderating the Policy and Regulation Track panel, which will take an intimate look at interstate compacts and their potential impact on the iGaming market at large.

The 2014 version of the Poker Players Panel will be chaired by Pokerfuse Editor Mike Gentile.

For more details on the upcoming iGNA, which is slated to take place from March 19 – 21 at Planet Hollywood Resort and Casino in Las Vegas, poker players and others interested in regulated gambling are encouraged to visit the conference’s dedicated web site. There, they will find a full slate of scheduled events and instructions on how to register.