Poker Players Alliance Going On the Offensive Over Black Friday

Poker Players Alliance executive director John Pappas has called on poker players to ensure that they “never fold in the fight for America’s greatest card game” as the one-year anniversary of Black Friday arrives this week. 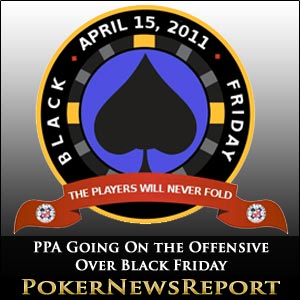 The Poker Players Alliance (PPA) executive director John Pappas has called on poker players to ensure that they “never fold in the fight for America’s greatest card game” as the one-year anniversary of Black Friday arrives this week.

The non-profit interest group have asked people to display their support for American poker players by downloading the PPA’s ‘Black Friday’ avatar and logo to place on the many social networking sites available, including Facebook and Twitter.

The PPA are asking “additional organisations” to take part in the campaign to legalise online poker in the USA by carrying a series of banner adverts on their respective websites, while the group will also be staging a Never Fold Money Bomb fund-raiser this week to support their advocacy endeavours.

Pappas also stated that, as “it has been a full year since the rights of millions of American poker players were trampled”, the PPA are determined that, “as a united front, we are calling on Congress to reverse this wrong and reinstate our basic freedoms”.

Of course, millions of poker players in the USA were left without online poker rooms to play in following the US Department of Justice (DoJ) decision to shut down numerous sites, such as PokerStars, Full Tilt Poker and Absolute Poker, in relation to charges of money laundering, illegal gambling and bank fraud on April 15 last year.

Pappas expects that every one of the country’s millions of players “who were affected on Black Friday” will not be able to “forget the dramatic impact the actions taken on that single day has had on their lives”.

He continued by stating that, with players’ frustrations growing “over their frozen funds and inability to play the game they love”, he believes it is “crucial that Congress hears our voices and knows that the players will keep fighting until online poker is licensed and regulated” in the USA.

The political lobby group – which was founded in 2005 – has also launched a revitalised website at ThePPA.org that emphasises the numerous methods American players can employ to show their support for regulating and legalising internet poker, while also assisting players in connecting with their representatives in Congress.

Pappas certainly appreciates all the work players have put in to push new legislation through Congress, saying that, “throughout all of our efforts over the past year”, it has been the players who proved to be “our strongest asset”.

He added that, “with more than 200,000 letters sent and thousands of calls placed to Congress – not to mention a steady up rise in social media outreach – players across the country have been voicing their frustration over the lack of legislative action”.

However, Pappas stressed that, as “players still wait for their government to provide a solution”, the PPA reckon it is time “for Congress to protect those they serve and pass legislation to license and regulate online poker in the United States”.

Meanwhile, if you want to assist the PPA’s aim of restoring American players’ right to play internet poker, you can make a contribution at their website from as little as $10, all the way up to $5,000.

Poker News Report will, of course, keep you updated on all things relating to Black Friday and online poker legislation in the USA.

Give your support, download the material from the PPA site:
http://theppa.org/neverfold-proud/