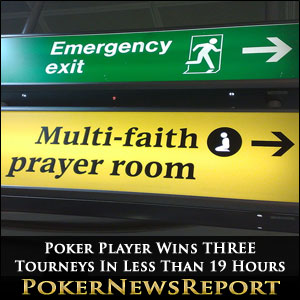 This is one of the most famous quotes from the movie “Any Given Sunday”, a movie that presents the everyday struggles of a professional (American) football team. The quote is not just about football, but also about life in general and can very well extend to the online poker world where thousands and thousands of MTT grinders are lining up every Sunday to play the major guaranteed tournaments on PokerStars.

Every Sunday, these grinders dream of winning at least one of these tourneys and win a big life-changing prize. They call it to bink – to risk a buy-in (many times much larger than their bankroll can sustain) and catch a lucky break. But what ‘gordijú’ did on September 28, 2014 is beyond binking. He took the grind and the notorious MTT variance to a whole new level and managed to do what few had done before him: he won three of those Sunday tournaments in less than one day.

The Spaniard who currently plays poker from the UK, by his real name Pablo Gordilo started his amazing run when he registered for the $109 Sunday Kickoff. The MTT started at 12:00 GMT and gathered up a field of 1,737 players. The total prize pool was $173,700 with Gardilo eyeing the $28K first prize.

Five and a half hours later, Gordilo started playing the $11 Sunday Storm, a tournament known for its big prize pool related with the small buy-in and also for its huge field. On September 28, things were no different with a total of 35,594 players trying to get a piece of the $356K prize pool.

At 19:00 GMT, yet another Sunday major started: The Bigger $55. The tourney attracted 5,636 including ‘gordijú’ who again had his eyes set on the biggest prize of them all.

Gordilo’s streak began with a three-way deal in the Sunday Kickoff followed by a solid win. The streak went on with an even impressive trophy, in the Sunday Storm and finished unbelievably at 6:27 GMT with the triple crown, in The Bigger $55. This means a total of $101,060.47 won in less than 19 hours. This also means he surpassed an aggregate field of 42,967 entrants.

If we do some simple calculations, we can clearly see the odds were clearly stacked against him: the odds of finishing first in all three was one in over 348 billion. Yes, that’s right BILLION! Of course, these types of calculations have several flaws: we gave each player an equal chance of winning just like in the lottery but we know most times, this isn’t the case in poker. Gordilo definitely would have had higher chances of winning those MTTs than most of the field if we had included the skill edge. Taken separately, the odds of winning the smaller-field tourneys were much, much shorter.

Nevertheless, his Sunday run remains shocking for any poker player, if not unique. But not that unique.

Over two years ago, the same question arose – Sickest Sunday Run Ever? – when Scott ‘stpauli111’ Hall won four PokerStars MTTs in one day and a total of $130K. The fields though were much smaller and not even close to the 35K Sunday Storm, nor to The Bigger $55 and two of them were actually rebuy tournaments.

Still, the facts remain; any MTT grinder will tell you that winning three or four tourneys on the same day is beyond imagination and ‘almost’ unachievable. ‘Almost’ because Hall and Gordilo proved us it CAN be done.