Poker on Display as Mental Exercise at Nations Cup

International Federation of Poker (IFP) will host the Nations Cup, a 2 tournament competition designed to promote poker as a mind sport rather than game of chance. 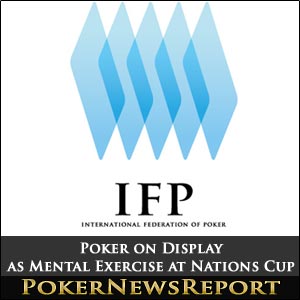 The International Federation of Poker (IFP) will host the Nations Cup on Nov. 17-20 in London, a two tournament competition featuring players from twelve countries designed to promote poker as a mind sport rather than a game of “chance” and to change people’s perspective on the game.

In the first of the two tourneys, each of the twelve participating countries will field six players who will compete in a duplicate poker tournament. Similar to duplicate bridge, duplicate poker sets up the decks of cards identically for each table. Players are awarded points based on how well their hands were played in comparison with other players at other tables who held and played identical hands.

IFP president Anthony Holden is the author of “Big Deal: A Year As A Professional Poker Player” and a follow-up book entitled “Bigger Deal.” On behalf of the IFP, he has actively been trying to persuade others that poker should be recognized as an official sport, similar to bridge, and for people to acknowledge the mind skills required and the many intricacies of the game.

“I’ve always been cross that poker has this seedy reputation,” Holden said, comparing poker to bridge.“They fought long and hard to make bridge respectable. We hope to put poker on the same road. People bet on chess and bridge but the world acknowledges that beneath that, these are fascinating, strategic games. It’s been slower to accept that about poker.”

Holden readily admits that although the game of poker has made some inroads in gaining respectability in the past ten years or so, the fraud and money laundering charges levied against the online poker sites Full Tilt Poker, PokerStars and Absolute Poker on Black Friday have tarnished the game’s image once again and there is a long way to go in gaining complete acceptance.

“Many schools run their own bridge clubs,” Holden said, “and no parent group would be up in arms if a teacher were to use bridge to explain a math question to teach probabilities and game theory. But there would be a stigma to an afterschool poker club.”

Holden sees many similarities in poker and bridge. “They both have much to teach.” he said. “It sharpens your ability to calculate. You need to know what your return on investment would be, what chips are available to be won, what you have to hazard to win it. On top of the math, there is psychology, the need to follow the moods of a player over the course of long game, to recognize fear, panic, frustration, aggression, all of our foibles, is great practice for business, relationships and life.”

The second tournament of the two tourneys of the Nations Cup, called “The Table” by promoters, will consist of 135 players who will square off in a deep stack No Limit Hold’em event, with a prize of $250,000 guaranteed to the winner.The IFP was created in Lausanne, Switzerland, in 2009 with its goal of making poker an official sport. Holden was elected as the organization’s first president. There are 35 poker groups worldwide that are part of the federation, including the U.K. Poker Federation, Russian Sport Poker Federation and the United States Poker Federation. The IFP advisory includes many pro players such as Humberto Brenes, Doyle Brunson and Gus Hansen.

The IFP gained admittance into the International Mind Sports Association (IMSA) in 2010, which recognizes various games such as chess, bridge, checkers and go. Along with Chinese chess or xiangqi, poker has attained the status of being an affiliated sport with the IMSA.

With Holden at the helm, the IFP is attempting to get rid of the stigma attached to poker and promote its popularity throughout the world. The organization sees the thousands of players who play poker on many free play social networking internet sites such as Facebook. “They are playing for no money, with no money, purely for the love of the game,” Holden said. “Those people are our audience. They are our rank and file.” With continued work by Holden and the IFP, maybe the attitudes surrounding the game of poker will be changed for the better.