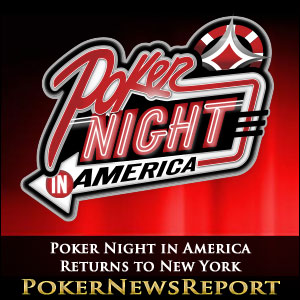 Scheduled to begin today, Aug. 15, and run through Monday, Aug. 18, the action takes place at the Turning Stone Resort Casino. A celebrity cash game that requires an invitation is slated for Aug. 15-16, and the tournament final table set for Aug. 18 will both be filmed and broadcast on television at a later date on CBS Sports Network.

The list of players scheduled to take part, both pros and celebrities, includes several names that poker fans will undoubtedly want to see. Film critic Richard Roeper will be competing, and viewers will have an opportunity to determine if his skill at poker is worthy of a thumbs up or thumbs down.

Other notables to be captured on film at the poker tables are 2012 Big One for One Drop champion Antonio “The Magician” Esfandiari, 2012 WSOP Main Event runner-up Jesse Sylvia, Phil “The Unabomber” Laak, Cherish Andrews, Shaun Deeb, Layne “Back to Back” Flack, and Jennifer Tilley.

Poker Night in America made its first-ever tour stop at the Turning Stone in August last year with Adam Foster besting a field of 426, who each paid a $1,650 entry fee, to take down the first place prize of $154,458. A healthy turnout is expected for the competition taking place this weekend as well.

PNIA episodes have been airing on television every Sunday evening since June 29. The agreement with CBS will allow programming to continue through December. Players and fans who happen to miss the action on Sundays can watch a new episode every Monday at www.pokernight.com. Several past epsidodes have been uploaded to YouTube.

Also available at the PNIA website is a livestream of the celebrity cash game that kicks off today. The action is projected to begin at 12:30 p.m. ET.

The goal of PNIA is to provide poker programming that is somewhat different than what players and fans have been accustomed to over the years. While great poker action at the tables will always take center stage, part of the focus has been diverted to the personalities of the players behind those big chip stacks.