Poker Night in America (PNIA) has announced that the Peppermill Reno Resort Spa Casino in Nevada will be the venue of its second tour stop in mid-November. 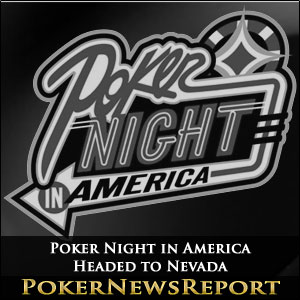 Poker Night in America (PNIA) has announced that the Peppermill Reno Resort Spa Casino in Nevada will be the venue of its second tour stop in mid-November.

After a successful coming out at the Turning Stone Casino in Verona, New York last month, PNIA is headed west to film the second installment of its first four productions. Although the poker action won’t be televised until early in 2014, there has been considerable excitement surrounding PNIA and its aim to revolutionize poker broadcasts.

In addition to tournament poker, PNIA has resolved to air high-stakes cash game action, as well as the hijinks and shenanigans that follows many a professional poker player away from the felt. Players and fans are excited to get a taste of this new programming that will undoubtedly add some excitement to the typical poker broadcasts shown over the years.

The Peppermill Reno has just undergone a $400 million makeover and is seen by PNIA producers as an ideal location for the next broadcast. “Poker Night in America Presented by Peppermill Reno” is scheduled to run November 15-24, with the Main Event commencing on Nov. 21. The buy-ins and exact tourney dates have not yet been announced.

A $25/$50 No-Limit Hold’em cash game will also be filmed in northern Nevada. A seat for that two-day game is by invitation only, but those who desire to play can email Nolan Dalla at nolan@pokernight.com to be considered. Be prepared to have a bankroll anywhere from $5,000 to $20,000 and keep in mind that hoodie and sunglass-wearing introverts need not apply.

The debut at the Turning Stone Casino in August featured a $500,000 guaranteed Main Event with an entry fee of $1,650. Cash game action with stakes of $25/$50 was also filmed. Featured players included Shaun Deeb, Layne Flack, Matt Glantz, Gavin Smith, Mike “the Mouth” Matusow and others. Look for filming at the Peppermill to showcase a similar cast of characters and a few fresh faces, as well.