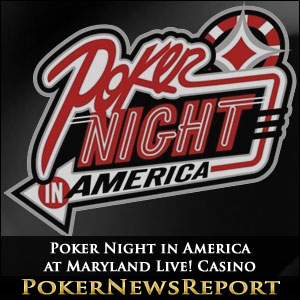 The $1 Million Live! Poker Classic is scheduled to be played at The Poker Room in the casino on March 10-24. Nine events are on the docket for the two-week series in which a combined $1,000,000 in guaranteed cash prizes will land in the pockets of winners.

Poker Night cameras will be rolling for the Main Event final table on Monday, March 24. The following day, two invite-only cash games will also be recorded featuring a number of well-known pros such as Matt Glantz, Gavin Smith, Christian Harder and Darvin Moon.

Also scheduled to compete are Maryland native Greg Merson, who proudly wore a Baltimore Orioles jersey while winning the WSOP Main Event in 2012, and Danielle ‘dmoongirl’ Andersen, who is no stranger to the cameras after appearing in the online poker film “Bet Raise Fold.” Andersen recently signed a pro sponsorship contract with Ultimate Poker.

Poker Night promises a few surprises with regard to the pro players who will be attending, preferring not to reveal their entire hand at this time. There are at least a couple of seats still open for the cash games with buy-ins ranging from $5,000 to $20,000. Players interested in participating and being part of the show can send an email to castingcall@pokernight.com stating their reasons for requesting inclusion. Simply stating I want to be on TV will likely not make the cut.

Players from throughout the East Coast that includes the online poker regulated states of New Jersey and Delaware are expected to make their way to the $1 Million Live! Poker Classic. The series kicks off on March 10 with a $550 No-Limit Hold’em event that guarantees $225,000 in prize money. The Main Event gets underway on March 21 at a buy-in of $3,500 and a $400,000 payout guarantee.

Poker Night in America has announced that its first television broadcast from tour stops filmed late last year is scheduled for April 27, 2014 on Comcast Sportsnet Mid-Atlantic. The show will also be aired on a national cable network that will be announced soon.