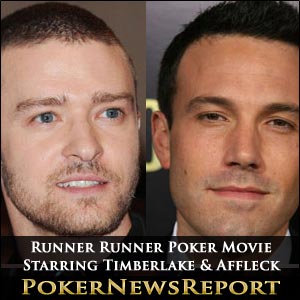 Online poker just keeps growing and growing – and now the phenomenon is set to hit mainstream cinema next year with the news that Justin Timberlake and Ben Affleck have been lined up to star in a new poker film entitled ‘Runner, Runner’.

The drama movie – which has been penned by ‘Rounders’ screenwriters Brian Koppelmann and David Levien – will take place in the world of online poker and follows the tense relationship between Affleck’s businessman character and one of his young workers, played by Timberlake.

However, anyone hoping for a sequel to 1998 crime-drama ‘Rounders’ – which starred Matt Damon, Edward Norton and Paul Cicero – will be sorely disappointed as this is a completely separate movie, according to entertainment magazine The Hollywood Reporter.

It is common knowledge that 39-year-old Oscar winner Affleck is a huge fan of poker and has even played in many tournaments – including the World Series of Poker (WSOP) – as has good friend Damon.

But this movie will not be about the glamour of the world’s greatest game as the screenplay focuses on the offshore internet poker community and the stressful relationship of the business founder and his youthful protégé.

Pop star turned actor Timberlake has already signed up to play the younger role, while Affleck – who picked up his Oscar for penning the screenplay for 1997 hit movie ‘Good Will Hunting’ with Damon – is still in negotiations to take on the other lead role alongside the 31-year-old.

Of course, internet poker grabbed the headlines last April when the US Department of Justice (DoJ) shut down numerous websites – including PokerStars, Full Tilt Poker and Absolute Poker – on what has become known as Black Friday, so it will be very interesting to see how this movie portrays those events.

This latest poker movie will be directed by Brad Furman – of ‘The Lincoln Lawyer’ fame – and is based on the screenplay written by Koppelmann and Levien, who enjoyed great success back in the late 90s with ‘Rounders’, which told the story of a young reformed gambler who is forced to return to high stakes poker to assist a friend in paying back loan sharks.

However, while there are no immediate details of a follow-up to ‘Rounders’, it is expected that some news will be forthcoming as it is hoped a sequel will be released some time during 2014.

Timberlake, meanwhile, has featured in a succession of high-profile movie roles over the past few years, and certainly impressed in director David Fincher’s 2010 biography-drama ‘The Social Network’, which picked up three Oscars for Best Adapted Screenplay, Best Original Score and Best Film Editing.

The SexyBack hitmaker also starred in last year’s sci-fi/thriller ‘In Time’, while Affleck now splits his days between directing and acting – and even occasionally takes on both roles, as with fabulous 2010 crime-thriller ‘The Town’.