If poker had a flag, it would likely be at half-mast right now as one of the game’s pioneers and legends, Bobby Hoff, passed away yesterday aged 73. 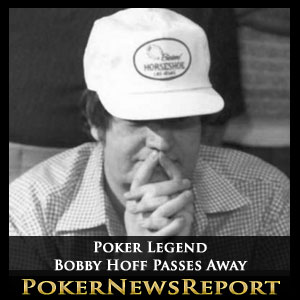 If poker had a flag, it would likely be at half-mast right now as one of the game’s pioneers and legends, Bobby Hoff, passed away yesterday aged 73.

Known as the Wizard, Hoff played poker for over 50 years, and is one of the few notable players to not have a major live poker tournament win to his name. That does not take anything away from his status as a top level poker player and superstar, however.

The Wizard had eleven total money finishes in the WSOP over a 24-year span, which includes a second place finish in the 1979 WSOP Main Event. He also took part in the fourth ever WSOP Main Event in 1973, where he finished tenth out of a field of 13 players.

He was a consistently solid performer at subsequent WSOP Main Events, with his worst ever performance being 62nd out of a field of 273. Hoff also made final tables in three other WSOP events and made the top 16 in four other events at the series.

So well regarded was Hoff, that the winner of the highest-ever cash prize at the WSOP Main Event, 2006 winner Jamie Gold, said that the Wizard was “maybe the best player in the world.” That was something displayed by his longevity and constant solid results in his professional poker career.

News of Hoff’s passing quickly spread through the poker community, with many other top level professional players taking to social media to give their condolences to the legend.

Fellow poker pro Erik Heidel took to Twitter to express his sadness of the Wizard’s passing as well as his praises for his personality and poker play. “RIP Bobby… Sad to hear about Bobby Hoff. He was a true NL artist + a pleasure to <see> at + away from table.”

Brett Ricey also took to his Twitter account to pass his condolences, describing the Wizard as a “complete boss”, while Mike Sexton referred to Hoff as a “poker legend” and highlighted the memorable heads-up play at the 1979 WSOP of which Hoff was a part.

Hoff was first introduced to poker in the 1960s after getting a job as a poker dealer in Las Vegas. He was also a solid blackjack player, but decided to devote himself to poker, a move that paid off both for him and poker as a game.