Preston died just after midnight on Sunday morning with his family beside him in a hospice close to his Amarillo home in Texas aged 83 following a long illness. 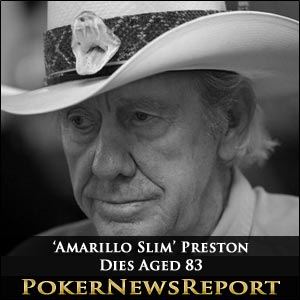 Legendary poker star ‘Amarillo Slim’ Preston died just after midnight on Sunday morning with his family beside him in a hospice close to his Amarillo home in Texas aged 83 following a long illness.

The four-time World Series of Poker (WSOP) bracelet winner – who was at the top of his game well before poker became the massive pastime that it is today – was born as Thomas Austin Preston junior on December 31, 1928, in Johnson, Arkansas.

Unfortunately, Preston’s passing did not come as a great surprise after another legend of the world’s greatest game, Doyle Brunson, took to microblogging website Twitter recently to post Amarillo Slim on his death bed.

Brunson and Preston, who had been at the hospice for a week, had toured around the USA – along with two-time WSOP winner and top-class bridge player Brian ‘Sailor’ Roberts – in the 1950s and 60s as the original ‘Texas Rounders’ looking to find high-stakes action prior to all of them becoming household names as tournament players in the 1970s.

The Poker Hall of Famer’s daughter confirmed the death of her father with renowned poker publicist and historian Nolan Dalla, before releasing a statement on the official WSOP website, which read: We hope everyone will remember our beloved Amarillo Slim for all the positive things he did for poker and to popularise his favourite game, Texas Hold’em.

Preston lifted his first WSOP bracelet back in 1972 when taking down the $10,000 buy-in No-Limit Hold’em World Championship for $80,000 at the Binion’s Horseshoe Casino in Las Vegas, although there was great controversy when Walter ‘Puggy’ Pearson and Brunson struck a deal with the winner that allowed Slim to take the crown but would also see them receive the cash vale of their chips stacks returned from the champion’s prize.

The former professional billiards player – who missed out on the poker boom – also recorded eight other WSOP cashes, the last of which came in 2008 when he finished 91st place in the $1,000 buy-in Seniors No-Limit Hold’em World Championship for $2,825 and a $437,265 total from the famous poker festival.

Inducted into the Poker Hall of Fame in 1992, Preston did gain some level of television fame soon after his first WSOP success in the 70s – even being credited with introducing poker to the mainstream – when he appeared regularly on US talk shows, including ABC’s ‘Good Morning America’ and the Johnny Carson-hosted ‘The Tonight Show’ on NBC, as well as other TV game shows such as ‘What’s My Line?’ and ‘To Tell the Truth’.

The poker star – who grew up in Texas city Mineral Wells before his parents divorced, when he then relocated to Amarillo with his father – really would bet on almost anything, once playing golf against American daredevil Evel Knievel armed with only a hammer. But possibly his most famous wager saw Preston supposedly win a $1 million bet after claiming he could strike a golf ball over a mile!

How did he win this wager? Slim made sure he was on a frozen lake to ensure that the ball continued to travel much longer than could ever be imagined.

Preston’s 2003 memoirs, ‘Amarillo Slim in a World Full of Fat People’, included a passage that emphasised his philosophy on gambling, which read: If there’s anything worth arguing about, I’ll either bet on it or shut up. And, since it’s not very becoming for a cowboy to be arguing, I’ve made a few wagers in my day. But, in my humble opinion, I’m no ordinary hustler. You see, neighbour, I never go looking for a sucker; I look for a champion and make a sucker out of him.

Slim Misses Out On ‘Poker Boom’

However, Preston’s later years were plagued by accusations of child molesting, resulting in his withdrawal from the game he loved. These August 2003 charges, author Dalla believes, robbed Preston of the appreciation and respect of the poker community at large – prompting him to write: While other less deserving poker players got rich and famous in recent years, Slim missed the poker boom entirely.

While a grand jury in Texas indicted the poker legend on several counts of indecency with a 12-year-old, the felony charges were dropped soon after, although Preston did eventually agree to plead no contest” to misdemeanour assault charges “to protect his family” – whereupon he was handed a $4,000 fine, two years’ probation and was told to attend counseling.

Years later, in 2009, Preston told Dalla in an interview that the accusations destroyed his family life as his former wife, daughter-in-law and son believed the charges, although he also emphasised that changed over time.

He said: Yes, that was right at one time. But that’s not true any more. All of them have since written letters about these charges saying it was a big mistake and the sexual abuse never happened.

Many within the world of poker will most definitely miss Preston, while his incredible contributions to the world’s greatest game should certainly never be overlooked.