Poker Is a game of Skill, Rules French Court

A French court has ruled that poker should not be considered a game of chance, although the country’s government has appealed against that decision. 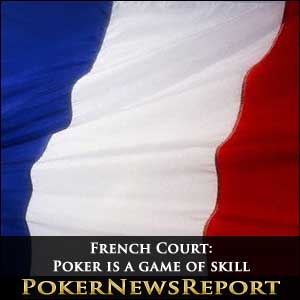 A French court has ruled that poker should not be considered a game of chance, although the country’s government has appealed against that decision.

A report appearing on French website Madeinpoker.com announced the decision, with the Toulouse court ruling that Texas Hold’em should be considered a skill game rather than one of chance.

That distinction is crucial as poker – if thought to be a skill game – cannot then be subject to the European nation’s gambling laws.

The case was heard after accusations were levelled at main defendant Jean-Pierre Gleizes, who is the manager of Les Coulisses and St Tropez, as well as others, with charges of organising private poker events in public venues without holding a licence brought against them.

However, the French Criminal Court of First Instance backed the defence’s opinion that poker should be seen as a game of skill following expert evidence from a pro poker player, as well as national champs in chess and bridge, and a mathematics professor who just happens to play poker.

But the prosecution has appealed that decision, with the ultimate ruling resting with the country’s Supreme Court – or Conseil d’Etat.

While it is likely that the Supreme Court will back the government and overrule the initial decision, if the court does support the defendants, there could well be some wide-ranging consequences to consider.

There are three very important likely outcomes if the Supreme Court did follow that original decision.

The biggest would be that poker could no longer be considered one of the games that fall under the Online Gaming Bill that just recently regulated the French market, resulting in operators avoiding licensing, taxes and fees.

However, there is political pressure being placed on the government to enlarge the bill to include games of skill, so that is not a definite yet.

Secondly, there would almost certainly be a massive impact on live poker rooms at casinos, while players making a living from poker would now see their income taxed because the game would be considered skilful.

So, if the ruling was upheld, [geolink href=”https://www.pokernewsreport.com/online-poker-rooms”]poker rooms[/geolink] would benefit, but pros would be subject to tax on their income – meaning there will be winners and losers, no matter the outcome of the appeal.