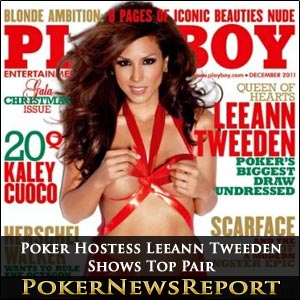 Gracing the magazine’s cover of the Christmas issue, Tweeden is decked out in just a red Christmas bow. The headline proclaims her as, “Queen of Hearts, Leeann Tweeden, Poker’s Biggest Draw Undressed.”

The 38-year-old model and ex-Hooter girl, Tweeden worked as a correspondent for six years on Fox Sports’ Best Damn Sports Show Period prior to joining Poker After Dark in 2008. As the third host of the late-night NBC poker television series, Tweeden got her first look at the varying personalities of poker players.

“A lot of the poker players are math whizzes, MIT grads with multiple doctorates,” Tweeden was quoted as saying in the men’s magazine. “They’re brilliant, and they’re cool people, but a lot of them are not socialized. They spend their time online.”

Tweeden was born in Manassas, Virginia. In pursuit of a modeling career, she took first place in the Venus International Model Search in 1992. Gaining national exposure by winning that competition, Tweeden also worked as a hostess at a Colorado Springs, Colorado Hooters restaurant, appearing in the 1994 calendar of the restaurant chain. Tweeden continued modelling and promoting Venus International and Hooters, in addition to Playboy and Frederick’s of Hollywood. In March of 2007, she appeared as the cover girl of FHM, which was the magazine’s final issue printed in the U.S. In 2008, Hooter’s celebrated its 25th anniversary, branding Tweeden as one of “The Top Hooters Girls of all time.” The next year, Tweeden lent her name to Rethinking Autism, a website that aims to educate people about autism.

Both the NBC National Heads-Up Poker Championship and the Full Tilt-sponsored Poker After Dark on NBC have been cancelled and are no longer being aired. The poker tournament and TV series, although popular, were victims of the lack of sponsorship in U.S.-based poker programming as a result of the Black Friday fraud and money laundering charges levied against the poker websites PokerStars, Full Tilt and Absolute Poker. However, ESPN and the World Series of Poker (WSOP) have recently signed a contract to televise WSOP poker tournaments for the next six years, through 2017.