With the recent announcement of Barry Greenstein and Linda Johnson being voted in as the newest members of the Poker Hall of Fame, we took a look at some statistics and facts about the prestigious club. 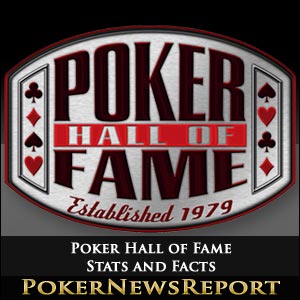 With the recent announcement of Barry Greenstein and Linda Johnson being voted in as the newest members of the Poker Hall of Fame, we took a look at some statistics and facts about the prestigious club.

There are now 42 members in the Poker Hall of Fame. Of those 42, twenty inductees are still alive today.

The Hall was established in 1979 by Benny Binion to preserve the legacies of the greatest players in the world. Upon its creation, the Hall enshrined seven charter members, including Johnny Moss, Nick the Greek and Wild Bill Hickok. Benny Binion joined the club in 1990.

Harrah’s Entertainment purchased the rights to the World Series of Poker (WSOP) in 2004, also assuming ownership of the Hall of Fame.

Johnson joins Barbara Enright as the only women inductees. Enright, enshrined in 2007, is the only woman to have made the final table at a WSOP Main Event and the first woman to win three WSOP bracelets.

Berry Johnston, inducted in 2004, has finished in-the-money in at least one WSOP event every year since 1982.

Dewey Tomko, the former kindergarten teacher voted in as a member in 2008, has played in every WSOP since 1974.

Three Hall of Fame members died while playing poker. Wild Bill Hickok, one of the most famous poker players before the 20th century, was shot in the back in 1876 allegedly while holding two eights and two aces, coining the phrase “dead man’s hand.” Tom Abdo suffered a heart attack while playing poker. Legend has it that Abdo asked another player to save his seat and count his chips after suffering the heart failure. Jack “Treetop” Straus is the third to die while playing poker. A 1988 inductee, Straus is best known for one of the greatest comebacks in poker history. In the 1982 WSOP Main Event, Straus was, at one point, down to his last chip. He came back to win the tournament, which led to the poker saying of “a chip and a chair,” meaning, don’t count a player out as long as he still has a chip and a chance to win.

Phil Hellmuth, who joined Enright in the 2007 induction, won the WSOP Main Event at 24 years of age in 1989, at the time the youngest player to win that coveted title. Peter Eastgate won the crown as a 22-year-old in 2008.

Chip Reese, at 40 years old in 1991, remains the youngest inductee. The rule for enshrinement was changed after Reese’s entry to the Hall. Nominees must now be 40 years old at the time of nomination.