Following voting from living Poker Hall of Famers and media representatives, Eric Drache and Brian Sailor Roberts will be inducted on Oct. 30. 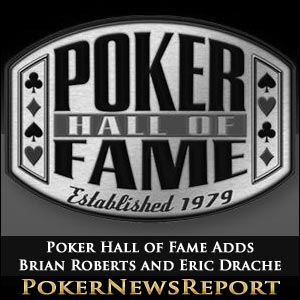 Following voting from living Poker Hall of Famers and media representatives, Eric Drache and Brian Sailor Roberts will be inducted on Oct. 30.

Drache has five World Series of Poker final tables on his resume, the latest a second place finish in the $10,000 World Championship Seven Card Stud event in 2009 that was good for $231,013. His poker contributions off the felt are quite extraordinary. Drache was the WSOP tournament director from 1973 to 1988 and is credited with creating satellite tournaments to allow players to win their way into tourneys without shelling out the full buy-in. He managed several Las Vegas poker rooms, including the Golden Nugget, Bellagio and Mirage. Drache has also served as a consultant to numerous televised poker events. Rather ironically, Drache, along with Jack Binion–a 2005 inductee–conceived the Poker Hall of Fame.

I’m not only surprised and honored to have been selected, I’m also a bit embarrassed considering the other nominees, said Drache. When Jack Binion and myself worked on creating the Hall of Fame, I never considered myself a potential candidate. I’m particularly happy for the family of ‘Sailor’ Roberts. ‘Sailor,’ by everyone’s account, including my own personal observations, was a great player and played many games very well.

Roberts, a two-time WSOP bracelet winner including 1975’s Main Event, passed away in 1995. He traveled the country playing poker with fellow Hall of Famers Thomas “Amarillo Slim” Preston and Doyle Brunson before landing in Las Vegas.

At a time in which professional poker players were viewed as outlaws and poker was illegal, he formed a partnership with Doyle and Slim and they traveled across the country from poker game to poker game, said Crandell Addington, a 2005 inductee. They deployed advanced strategies unknown at the time that featured playing their opponents hands on many occasions rather than their own hands.

Drache and Roberts bring to 44 the number of members in poker’s most elite club. The requirements for induction include a minimum of 40 years of age, competition at high stake levels and against other top players, and having earned respect from peers in the poker industry. Those inducted for reasons other than playing must have contributed to poker’s growth with lasting results.

The induction ceremony for the Poker Hall of Fame’s 2012 class will be held on Oct. 30 at the Rio All-Suite Hotel & Casino in Las Vegas prior to the conclusion of the WSOP Main Event final table.