Poker Going Mainstream In The US

Global Poker Index (GPI) has made an important step towards promoting the game of poker to the U.S. mainstream audience and partnered up with CineSport. 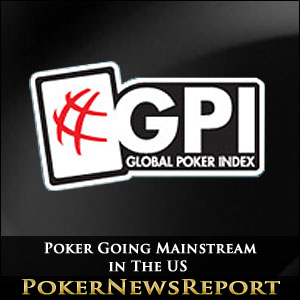 Global Poker Index (GPI) has made an important step towards promoting the game of poker to the U.S. mainstream audience and partnered up with CineSport.

The numbers don’t lie. According to GPI, 22.5% of all visitors and 34.9% of visitors aged 18 to 24 who frequent the major American sport sites are actively interested in reading [geolink href=”https://www.pokernewsreport.com/texas-holdem-poker”]about poker[/geolink]. The future looks even brighter as the company believes the percentage will grow to over 30% of total major sports site visitorship.

What these numbers show us is that there is room for growth in this niche. Sports fans (especially young ones) are quite enthusiastic about poker and most of them regard the game as a competition based on skill rather than pure luck.

Of course, hardcore poker readers know their sources but what about the other ones who could become interested given the chance? What about the 8% gap between the present and the future?

Well, it seems that GPI came out with a solution of how to reach ‘the other ones’: the company signed a partnership deal with the innovative web video syndication company CineSport. With more than 100 affiliates and over 30 newspaper sites including the New York Post, Philadelphia Inquirer, Boston Globe, Los Angeles Times, Atlanta Journal-Constitution and the Milwaukee Journal Sentinel, CineSport delivers video sports content to over 7 million unique monthly visitors.

Now the company will produce and distribute original poker programming like live tournament highlights, ranking updates, and features to all its clients across America.

This strategic partnership finally gives up the opportunity to reach a U.S. sport market that’s interested in poker content. This is a great first step towards a larger plan to bring poker into the mainstream consciousness.

CineSport COO Michael Dresner acknowledged the rise of the new sport and was reportedly optimistic about its growth in the next few years.

Communication is the key

The announcement came three days after GPI launched the idea of a poker industry summit held in both Europe and North America. The Global Poker Conference (GPC) is scheduled for the first quarter of next year with many of the game’s operators and brands across the two continents expected to come.

The main purpose of the GPC is communication between the major players in the industry, communication that has been non-existent for the past several years. The strategic discrepancy between the live and online operators is already widely known while the lack of a consistent plan across the major markets has caused a systematic revenue meltdown.

In the U.S., the poker industry took a huge hit after Black Friday and continues to have its fair share of problems three years after the unfortunate event. An event such as the GPC could narrow the gap between the gaming operators; others like the American Poker Awards (that debuts on February 27, 2015 in Beverly Hills, California) combined with partnerships such as the GPI and CineSport could raise the awareness of the mainstream America (which remains the largest market in the world) that this game is indeed more like a sport than a useless gamble.