MGM Resorts International has filed lawsuits against two companies and four individuals it accuses of tragemark infringement by registering domain names for poker websites that use the names of several MGM-owned casinos in Las Vegas. 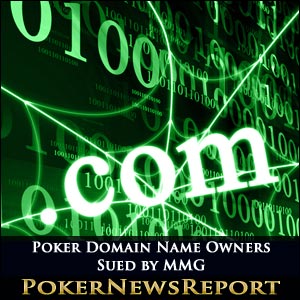 MGM Resorts International has filed lawsuits against two companies and four individuals it accuses of trademark infringement by registering domain names for poker websites that use the names of several MGM-owned casinos in Las Vegas.

The domain names of a few of the websites were registered many years ago in 2002 and 2005. MGM Resorts is apparently thinking ahead regarding online poker becoming legalized in the United States and is attempting to avoid any cyberspace confusion about ownership of the poker sites.

According to the lawsuit, the MGM casino names are well-recognized because MGM Resorts doled out billions of dollars in promoting and advertising the land-based casinos over a period of many years, and the six defendants are attempting to capitalize on MGM’s investment. The individuals and companies who registered the names did so with the intention of profiting from the “substantial fame, goodwill and consumer recognition” of the casinos.

“The defendants have or have had a bad faith intent to profit from their registration of the domain names,” the lawsuit charges, and alleges that the defendants have committed either “cybersquatting,” which is known as using the trademarks of others to profit online, or have fully infringed on the trademark, or are possibly guilty of both infractions.

“The defendants have done nothing more than tack on the descriptive terms ‘poker’ or ‘online poker’ to each of the MGM marks to form the domain names. Accordingly, there is no question that the domain names are confusingly similar to the MGM marks,” said MGM Resorts’ attorneys from the firm of Lewis and Roca LLP, in a legal document requesting the judge to order the defendants to temporarily restrain from the usage of the names.

The named defendants in the legal action are:

Earlier this year, MGM forged a partnership with land-based casino company Boyd Gaming Corp., and Bwin.party, which operates Party Poker, aimed at entering the U.S. online poker market if, and when, legislation is enacted that will permit [geolink href=”https://www.pokernewsreport.com/us-poker-sites”]online poker in America[/geolink].

Under the agreement, the U.S. casinos and the Gibraltar-based Bwin.party will each have a stake in brand new online poker companies that would offer online gaming under the name of PartyPoker and additional brand names. The deal will create a new entity that divides ownership by giving a 65 percent stake to Bwin.party, 25 percent to MGM, and Boyd Gaming receiving a share of ten percent. Boyd and MGM will use Bwin.party’s software to run [geolink href=”https://www.pokernewsreport.com/online-poker-rooms”]online poker sites[/geolink] featuring their own brand names.