Three Italian poker players were arrested for allegedly marking a deck of cards with invisible ink and wearing infrared glasses or contact lenses to see through the cards of their opponents in a Cannes casino. 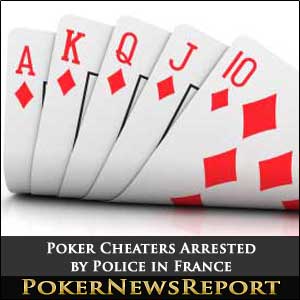 Three Italian poker players were arrested for allegedly marking a deck of cards with invisible ink and wearing infrared glasses or contact lenses to see through the cards of their opponents in a Cannes casino.

The poker dealer, a Frenchman, and another casino employee, were also arrested and accused of being part of the ruse.

Suspicion about the Italian players was first aroused in August when the trio reportedly pocketed more than $60,000 in one night. Casino officials couldn’t positively confirm the scam at the time. But they did set up a sting operation to nab the cheats if they tried to pull the gambit again, which they did at the Les Princes Casino on Tuesday, attempting to walk away after winning $41,000.

The alleged cheaters are believed to have ties to organized crime. French gaming officials are investigating the possibility that the con men have been running the same scam throughout Europe. To successfully pull off the scheme, the poker dealer must be in on the ruse and put the deck that has been marked by the players into play.

The ploy is said to be well-known in the United States, but not so in France. In a search of Youtube, there are many video demonstrations that show how the cheating would work at a poker table. In a U.S. casino, a poker dealer who was convicted of such a crime would be looking at a lengthy prison sentence, in addition to being barred from entering casinos. It is not known what the punishment would be in France.

This is the second scandal emanating from the poker world in Europe in just over a year’s time. In 2010, Ali Tekintamgac, a poker professional from Germany, was disqualified from playing at the final table of the Partouche Poker Tour Main Event after tournament authorities accused him of using co-conspirators who posed as tournament reporters to roam the floor and pass signals to him with information on the hole cards of his opponents.

Also underway in Cannes, France at this time is the 2011 World Series of Poker Europe, being held at Majestic Barrière Cannes and the Le Croisette Casino Barrière. Four of the seven scheduled events have been completed, with the prestigious €10,400 Main Event scheduled last.