The animated series, ‘The Micros’, will be transformed into a web comic, at least until a sponsor will be found for the video production funding. 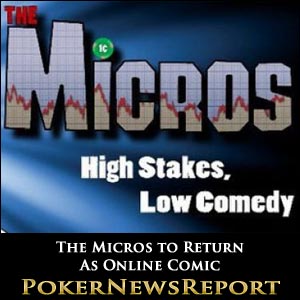 Poker is most definitely an established part of pop culture these days, with numerous stars of the world’s greatest game crossing over into the mainstream. We’ve even seen a few Hollywood movies – such as ‘Rounders’ – hit the big screen, while on television we have numerous shows broadcasting games.

But what of the well-liked animated series, ‘The Micros’, which has attracted thousands of viewers on video sharing website YouTube? Many of us have enjoyed the antics of Maximilian Röfls III (Max), Chase Berger, Tommy Phuoc and Rose Ballenger – but not over the past four months, unfortunately.

While creator John Wray has entertained with his biting sense of humour – even highlighting the plight of poker players in the USA through a particularly perceptive airport scene in one episode – he has also discovered that animation is really ‘spensive. That’s ‘expensive’ for those of us unable to translate!

Still, Wray has not completely ditched ‘The Micros’ – instead taking the decision to transform the animated series into a web comic, at least until he can locate a sponsor to help with video production funding.

That’s some good news for the show’s followers, with Wray also assuring fans that Max, Chase and Rose will return in the comic, along with numerous celebrity guests – including World Series of Poker (WSOP) commentators Norman Chad and Lon McEachern.

In fact, you can check out Norman and Lon – as well as Max, Chase, Tommy and Rose – in the comic strip’s latest teaser that was posted on their Facebook page at http://www.facebook.com/TheMicros.

Many poker fans had taken to penning their concerns for the popular show on poker forum TwoPlusTwo recently, prompting Wray to provide a reply that was pleasing to read.

In his response, Wray pointed out that, while he is hopeful he and his crew will soon be back making cartoons, the cost of creating each new episode was becoming too restrictive so he took the decision to put out a web comic featuring the same characters – hopefully several times a week.

Wray also stated that, instead of struggling to release a bi-monthly video episode, he thought it wise to introduce the comic strip – until, that is, if and when we get sponsored.

For now, though, you can check out all things relating to ‘The Micros’ by visiting their Facebook page. Enjoy!

It’s amazing, though, that as one poker series transfers from animation to ink (sort of!), a new comic book all about this incredible and exciting game is preparing to hit the virtual shelves of many online stores within the next few weeks.

As might be expected, ‘Shut Up & Fold’ have a Facebook page, where several trailers can be viewed. The official trailer is certainly exciting, with dramatic music and vibrant visuals introducing us to characters such as Magma 90, RudeBoy, Big Baba, Snaker and Irontrader.

The trailer, for what will be a monthly comic available in English, Italian, Chinese and possibly Portuguese, also provides some theatrical passages, most definitely included to drive the drama of the video clip forward (as well as to encourage you to part with your hard-earned cash!). Check this out for an introduction: 9 players, they are all ready to lay their hearts on the board…

We are then introduced to, strangely, eight characters from the comic before more text appears: Different lives, different styles, only one common element…they are all hungry. Shut Up & Fold.

Now, I know my arithmetic is good, but I managed to count 10 characters during the trailer. Correct me if I’m wrong, please. Lots of late nights at the virtual tables can affect even those with stronger constitutions than me.

Anyway, as well as the five previously mentioned characters, I noted down others, such as Trabailaconmico, Yokozuna68, Sambinha, Zar89 and Xionme. Phew!

ESPN’s Playbook chatted with Italian Giancarlo Antonetti, who, as well as playing poker, has created ‘Shut Up & Fold’ to discover what encouraged him to produce the comic book.

Firstly, while stressing that he is a real fan of the game, Antonetti – who once won $15,000 in an online tournament – has invested all the money he has earned playing poker to develop this online comic.

Antonetti, who, however, plays mostly for fun, reckons poker players are addicts and are continuously searching for something poker-related – partly because there are entirely good stories about players out there.

In what appears to be a massive hint as to the path the comic will take, Antonetti also emphasised that, because of poker, many millions of people have been provided with an opportunity to learn about life, to become somebody, to make riches… and become champions.

However, he was also at pains to point out that the comic’s target audience is not just the many millions of poker players throughout the world – stressing that the storyline will assuredly be for everybody, including the even larger group that make up comic books fans, as it won’t only be about the game, but about their lives, their fight for success, their loves affairs, as well as betrayed friendships…and more.

It all sounds thrilling, of course, but the bottom line is that there will be 40 coloured, digital pages that can be bought for about $2 at e-commerce websites such as Amazon, ComiXology and iTunes – so you can soon make an informed decision of your own. You can also check out the trailer at http://www.facebook.com/shutupandfold

Now, don’t forget to let us at Poker News Report know what you think of the comic…