Pocketfives.com started their Poker Refugee service, helping online poker players will all their needs in different plans to relocate to Panama, Costa Rica and Canada. 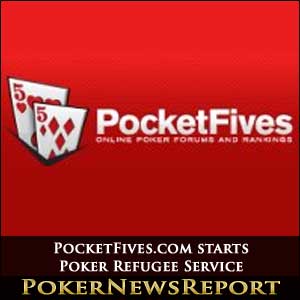 Online poker took a huge hit in the United States after the Black Friday indictment of three of the largest online poker sites were forced to stop allowing US based players. Full Tilt Poker, PokerStars, and Absolute Poker, all were indicted for things like fraud and money laundering, leaving United States based online poker players very few options on places to play.

At this point, four months later, players are in an even worse spot; with very few [geolink href=”https://www.pokernewsreport.com/us-poker-sites”]poker sites allowing US players[/geolink] currently. This had made players either have to begin playing more live poker in places like Las Vegas or Atlantic City, or relocate to another country. Fortunately though, the online site Pocket Fives has created a “Poker Refugee” program, in order to help players make the move to countries that will allow them to play.

Pocketfives.com has online poker tournament rankings and multiple forums which allow players to interact and chat with each other about anything poker related. They are currently running the Poker Refugee program, which is a flat-fee service that will guide poker players and make their relocation to a new country much easier.

This program was created by Kristen Wilson, who actually lives in one of the three current countries (Costa Rica) that they are helping players relocate to. The three countries that Poker Refugees is currently working with are Panama, Costa Rica, and Canada. Wilson is currently a licensed member of the Costa Rica Global Association of Realtors, and is now the head of this Poker Refugees service.

There are many things that the Poker Refugee service will help with, ranging from helping players find a place to live, setting up a bank account, getting local internet and a backup connection set up, and getting a new cell phone service set up. There are many other things as well, including things like getting the players’ Visa and tax information squared away, they offer a discount on setting up a corporation, and even provide safe transportation for the online poker players from the airport on the day that they get into the country.

The Poker Refugee service will offer a few different plans for players, with the cost of an individual plan being $1,000, a roommate plan being $750 per roommate, and an entire family being $1,500. Players do pay for their own moving fees, deposits, and the other costs which are typically associated with a move without this service.