The final table of the PokerStars World Championship of Online Poker Main Event provided an intriguing and dramatic climax to the WCOOP Series. 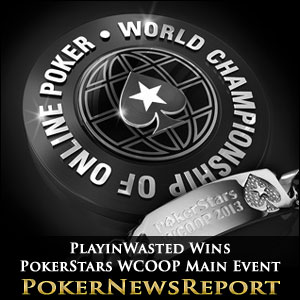 The final table of the PokerStars World Championship of Online Poker Main Event provided an intriguing and dramatic climax to the WCOOP Series.

The conclusion to the WCOOP Main Event was as fascinating as any event to be played before in this series of online championships. 2,133 players participated in the two-day tournament – either by qualifying online or directly buying in for $5,200 – creating a prize pool of $10,665,000 which would be shared between the top 243 players.

After ten hours of play on the first of the two days, 296 players remained. It took little over an hour for the bubble to burst when the game resumed on Monday evening, and after four hours just 89 players remained – the tournament having lost many of its PokerStars sponsored pros; one notable exception being Shane “Shaniac” Schleger, who still featured in the chip counts when the final table of nine was set ten hours into Day 2.

With blinds now up to 50,000/100,000 (ante 12,500), the shortest stack players were picking their spots carefully. Vampyboy (J♣ J♥) must have believed he was en route to a valuable double-up against PlayinWasted (A♥ J♦) following the flop of K♣ K♥ 10♥, but the A♠ fell cruelly on the Turn to eliminate Vampyboy in ninth position and set the tone for what was to follow.

The hard luck stories continued as Pokerl)evil fell in seventh (A♣ J♥ > A♠ Q♦) to PlayinWasted after ‘Wasted’ caught the J♦ on the flop to come from behind, and Shane ‘Shaniac’ Schleger (5♠ 5♥) was eliminated in sixth when SwissCantMis (A♠ K♠) found the A♣ on the Turn to bust the last Red Spade PokerStars sponsored player from the WCOOP Main Event.

However, the hardest of the hard luck stories would be owned by alexandrapau, who responded to Allanon85´s 10 million chip shove by calling for his tournament life. Both players turned over pocket Aces, but Allanon85´s developed into a rivered flush to leave alexandrapau exasperated and out of the tournament in fifth.

With Allanon85 now leading the chip stacks from PlayinWasted and SwissCantMis, 1M.BanKroLL was the only non-German player left at the table, and his participation in the WCOOP Main Event was soon in jeopardy as he slumped to 1.15 million in chips. Eventually he took a chance with K♣ 7♠, but was caught out by Allanon85, who had woken up with A♣ 5♠ and hit two pairs on the board to eliminate 1M.BanKroLL in fourth.

Thereafter, the three Germans negotiated a deal based on their ICM which would see each of them assured with at least $1 million and leave $160,000 to play for. Despite Allanon85´s KO of 1M.BanKroLL, his lead was soon wiped out when PlayinWasted flopped a Flush against him and got three streets of value, but Allanon85 was able to recover by eliminating SwissCantMis in third A♣ K♥ > A♥ 7♦.

With fairly similar prizes locked up and $160,000 to play for, the heads-up could have been over and done with in a matters of minutes – but it wasn´t. PlayinWasted took a 25,741,317 -v- 16,918,683 chip advantage into the heads-up against Allanon85, but that advantage was reversed when Allanon85 flopped two pairs which converted into a Full House in one of the first hands of the finale.

Allanon85 used his new advantage to chip away at PlayinWasted´s stack – at one point reducing his compatriot to less than 5 million chips (blinds now 150,000/300,000). However, two double ups by PlayinWasted soon redressed the balance and, with the momentum now behind him, PlayinWasted pushed ahead into a chip lead.

The game continued in this manner for the next hour until – with the blinds at 200,000/400,000 – PlayinWasted limped in from the button with A♠ K♠. Allanon85 (K♣ Q♠) responded by raising to 888,888 chips and PlayingWasted announced that he was all-in. Allanon85 made the call for his last 4.5 million chips and the cards were on their backs.

The community cards of 4♠ 2♣ 10♠ / J♥ / J♠ were a bit of an anti-climax for the thousands of railbirds following the vent – especially after what had happened previously at the final table – but not so much for PlayinWasted who collected a WCOOP bracelet and $1,493,499 for his victory.