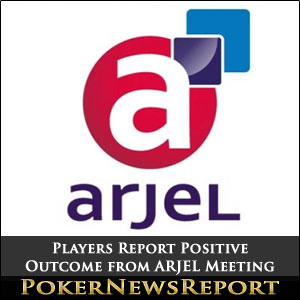 Last week representatives of France´s online poker community met with Charles Coppolani – President of the “l´Autorité de Régulation des Jeux En Ligne” (ARJEL) – to address many concerns shared among French poker players, not least the recent collapse of Europoker.fr and the €100,000´s that will be lost to players in the form of outstanding bonuses, tournament tickets and rakeback.

In addition to M. Coppolani, five other officers of ARJEL were present, while the players were represented by Antoine “MisterVolty” Lafond (a journalist with pokerstratgy.fr), Iannis “BigBox” Iglesias (the Director of Operations at Poker-Académie.com) and two officials from “Association Française des Joueurs Poker en Ligne” (AFJPO) – Alexander “Skip” Crouan and Jean Xavier “Personne” Raynoud.

The View from Opposing Sides of the Table

The two sides have widely contrasting views about what has caused the decline of online poker in France since its regulation in 2010, and how the fall in traffic can be reversed – the ARJEL President having recently told the media that the French online poker market was in decline due to the worldwide economic crisis and because the game is a little out of fashion.

The French poker players dispute this argument, and say that online poker in France has suffered due to high taxation, poor liquidity and the availability of unregulated sites to the highest-value cash game players who can no longer find the action they crave on the French regulated sites (according to figures produced by AFJPO, the top 10% of players account for 92% of the money that circulates on the regulated cash tables).

Three major areas of discussion dominated the meeting – the limited variety of poker games that the regulator allows, the taxes charged to operators (which results on a higher rake percentage for the players) and the opening up of the French regulated market to join other regulated markets in the UK, Spain and Italy.

The players complained that in brick and mortar casinos they could play disciplines of poker such as Razz, Stud and Draw – but these were not allowed on the French online sites, which were limited to Texas Hold´em and Omaha. M. Coppolani explained that, despite being in favour of adding these new games, the regulator has its hands tied by laws passed by the French government and it would require a change in legislation to introduce these variants of poker.

Coppolani also agreed that the taxes charge on online poker operators were high when compared with other regulated markets. The French currently charge online operators 2% on their “Produit Brut des Jeux” (PBJ – Gross Gaming Revenue) which represents around 35% on their net profits. The players´ representatives argued that a reduction in this rate would enable online poker operators to reduce the rake charged at the tables and encourage more players to remain on the domestic poker sites, rather than play on unregulated poker sites with a lower rake (which apparently 46% of players in France do).

The third issue – one of shared liquidity – is one that has already been rejected by the French Parliament, but is one that the poker players want M. Coppolani to try again. ARJEL is in favour of opening its online poker borders with countries that have already regulated poker, but faced opposition from the Committee on Economic Affairs and the Ministry for the Economy when the issue was raised in the National Assembly last December.

What about the Europoker Players?

The meeting between representatives of France´s online poker players and ARJEL had been organised prior to the collapse of Europoker.fr; but the players were able to include this issue on the agenda for the meeting. The problem concerning the collapse of Europoker.fr is that the site only segregated the value of players´ bankrolls, and not the value of assets such as outstanding bonuses, tournament tickets and rakeback.

Furthermore, it was revealed in the course of the meeting that some players had converted their bonuses and tournament tickets to cash, and withdrawn the cash and their outstanding rakeback prior to the collapse of the company. This has left a significant hole in the amount of money held in the trust fund (in which the players´ bankrolls are segregated) and it is something that ARJEL´s legal director – Frederick Guerchoun – is going to bring up with the liquidator of EP MEDIA – Europoker´s parent company.

Better Communication in the Future?

In the past, ARJEL has been perceived by online poker players to be aloof from the problems faced by the industry and unwilling to tackle the issues. However, M. Coppolani told the players´ representatives that he intends to develop relationships between ARJEL and player groups and the exchange of communication to address issues raised by players.

The feedback from the players who attended the meeting was generally positive, as they believed that M. Coppolani has the political influence to adopt some of the measures suggested at the meeting and a genuine interest in reviving the French online poker market for the benefit of players and operators alike.

Their optimism also came with a note of caution inasmuch as it will take significant reforms to revitalise the online poker economy in France, and the question is whether the reforms will come in time (and be effective when they are introduced) to prevent the crisis in the French online poker market from deepening beyond survival.