The long-awaited “first-of-three” statements from Full Tilt Poker was released this morning. Claiming to be an update on “what the company was doing”, the text of Full Tilt Poker´s release contained nothing of value to the many millions of poker players waiting for the return of their bankrolls. 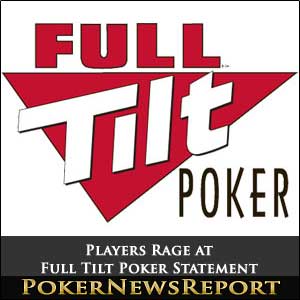 The long-awaited “first-of-three” statements from Full Tilt Poker was released this morning.

Claiming to be an update on “what the company was doing”, the text of Full Tilt Poker´s release contained nothing of value to the many millions of poker players waiting for the return of their bankrolls.

It also pre-empts the second and third “statements” by commenting on the deposit shortfalls from 2010/2011 and the company´s frozen assets.

As is obvious from the events that have transpired since April 15th, Full Tilt Poker was not prepared for the far-reaching, US government enforcement effort of Black Friday.

The events of Black Friday came on the heels of prior government enforcement activities and significant theft. Over the two years preceding Black Friday, the US government seized approximately $115M of player funds located in U.S. banks. While we believed that offering peer-to-peer online poker did not violate any federal laws—a belief supported by many solid and well-reasoned legal opinions—the DOJ took a different view. In addition, as was widely reported, a key payment processor stole approximately $42M from Full Tilt Poker. Until April 15th, Full Tilt Poker had always covered these losses so that no player was ever affected. Finally, during late 2010 and early 2011, Full Tilt Poker experienced unprecedented issues with some of its third-party processors that greatly contributed to its financial problems. While the company was on its way to addressing the problems caused by these processors, Full Tilt Poker never anticipated that the DOJ would proceed as it did by seizing our global domain name and shutting down the site worldwide.

Over the last four months, Full Tilt Poker has been actively exploring opportunities with outside investors in order to stabilize the company and pay back our players. At least six of those groups, including hedge funds, operators of other internet businesses and individual investors, have visited Dublin to inspect the operation. We have recently engaged an additional financial advisor through an investment banking group to assist us in our search for an infusion of cash as well as a new management team to restore the site and repay players. While any deal of this nature is necessarily complex given the current regulatory environment, our players should know that Full Tilt Poker is fully committed to paying them back in full and restoring confidence in our operations.

The “news” from Full Tilt Poker did not bring any information to light that was already known other than the amount of money that was seized by the DoJ. The fact that player funds of $115 million were not segregated and were placed in Full Tilt Poker´s operating account is only an admission of guilt that their financial management was irresponsible at best and criminal at worst.

The $42 million “stolen” by Daniel Tzvetkoff and Intabill, led to the Australian ratting out Full Tilt Poker (and PokerStars and Cereus), so their operations were not as squeaky clean as they would try to impress. Furthermore, Full Tilt Poker´s court action against Intabill (under their Aruban trading name of Kolyma Corporation AVV) started in June 2009 – so this barely new news at all.

The shortfall from Full Tilt Poker´s inadequacy to collect player deposits in 2010/11 is estimated to have cost the company $138 million. It was widely known at the time that players were not being debited for transactions made into their Full Tilt Poker accounts, and many people took advantage of this – staking their poker accounts with tens of thousands of dollars before closing their personal bank accounts.

Only 6 Investors Does Not Inspire Confidence

The claim that six potential investors have looked into taking over the Full Tilt Poker does not inspire confidence in any future deal will be done. The only one of the six that can definitely be acknowledged is Jack Binion, although it has been suggested that Bwin/Party have also investigated the possibility of bailing out the site. If a business with the potential of Full Tilt Poker can only attract enquiries from six investors over the period of four months, it implies that the company is in such dire trouble that nobody wants to know.

The initial reaction from ex-Full Tilt Poker players was one of disappointment and anger. Arguments that not a single word of the Full Tilt Poker news would have been in breach of their alleged confidentiality agreement have inflamed views that Full Tilt Poker are just playing for time ahead of their rescheduled appointment with the Alderney Gambling Control Commission on September 15th.

It is unbelievable that Full Tilt Poker allowed the situation regarding their inability to collect funds to continue once it was brought to their attention (by honest players who were writing to Full Tilt Poker customer services), and despite Full Tilt Poker´s assertions that they were “addressing the problems” of payment processing, comments made by their staff in the Dublin head office would suggest otherwise.

Other questions relating to alleged bank fraud, multi-accounting and the millions “lent” to Team Full Tilt Poker players remain unanswered, and if this is the best that Full Tilt Poker can do as they “strive to have better communication with its customers” (from FTP Statement 23.08.11), then they might as well not bother.

Parts 2 and 3 of the Full Tilt Poker statements are due over the next two weeks according to Jeff Ifrah – an attorney defending the current Full Tilt Poker lawsuits. We hope for better news than this, but remain doubtful that it will ever materialise!