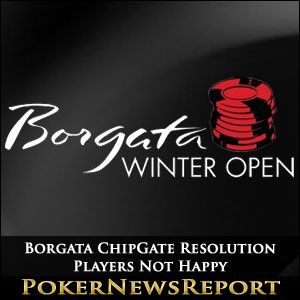 Back in January, the opening $1 million guaranteed event of the Borgata Winter Open was cancelled with twenty-seven players remaining when it was discovered that counterfeit chips had been introduced by Christian Lusardi during the early stages of the tournament.

The New Jersey District of Gaming Enforcement (NJDGE) held an enquiry into the running of the event, and yesterday released a Final Order which instructed the Borgata to refund the event buy-in to 2,143 players who they consider to be “impacted” by Lusardi´s cheating, with the remaining prize pool distributed equally among the twenty-seven players who were still in with a chance of winning the $372,123 first prize.

Who Qualifies for a Refund from the Borgata?

The criteria for players who will receive a refund from the Borgata have been carefully considered by the NJGDE, but are quite complicated:

Because of the complex nature of the refund criteria, the Borgata has opened a Hotline (609.317.1000) that players can call to see if they are eligible for a refund. The Borgata has announced that players who are entitled to receive a return of their $500.00 buy-in (plus the $60.00 tournament entry fee) will receive a cheque in the mail within ten days.

What Happens to the 27 Players who Remained?

This is the part that is incendiary. When the tournament was cancelled, the twenty-seven players that were still active in the Borgata Winter Poker Open Event #1 were playing for a combined prize pool of $1,433,145 (the event smashed its guarantee and the total prize pool was $2,325,835).

Once the Borgata refunds the tournament buy-ins and tournament entry fees to the 2,143 players considered to be impacted by Lusardi´s (alleged) cheating, this leaves just $521,725 in the prize pool, which the NJDGE has ordered should be distributed evenly – i.e. each of the twenty-seven remaining players will receive $19,323.

Although this amount is more than what the tenth place finisher would have received, it still means that has been a 63% deduction from the prize pool and that the chip leaders have been deprived of the opportunity to win six-figure amounts.

As soon as the NJDGE´s decision was announced, Twitter was alight with comments from players stating how unfair the resolution was to the twenty-seven players remaining in the tournament. Nick Guagenti – who was second in chips when the tournament was cancelled – tweeted:

Not surprised by this ruling from the DGE. Will b surprised if @BorgataAC doesn’t step in like they claimed they would and compensate fairly

this is not even an even chop they took over half the remaining prize away than chopped it evenly. Unreal if this stands

More than a dozen pages were filled on the 2+2 forum page dedicated to the scandal, with the consensus of opinion being that the Borgata should put their hands in their pockets and make good the deduction from the prize pool – one contributor suggesting that the tournament should be re-convened and played down to a winner for the full prize money.

Is Legal Action Still a Possibility?

In February we reported that a class action had been initiated by one of the twenty-seven players who remained in Event #1 of the Borgata Winter Poker Open – Jacob Musterel – who was intending to recover the buy-ins for all the players who had competed in the tournament on the grounds that the Borgata had inadequate security in place to monitor the tournament and had failed to listen to the players when they initial raised concerns about the counterfeit chips.

The order by the NJDGE to refund players impacted by the counterfeit chips will have dampened the chances of the class action succeeding; but there is still the possibility that the twenty-seven players who have seen a reduction of almost $1 million in their prize money will bring some form of legal action against the Borgata should the casino not take it upon themselves to remedy the situation.

It would appear that we have not yet heard the end of this story, and you can catch up with any developing news by following @PokerNewsReport on Twitter.