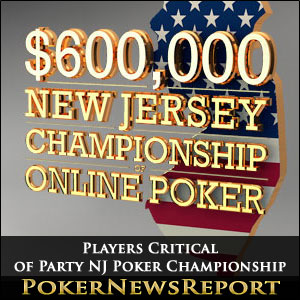 Last week, Party Poker announced a New Jersey Championship of Online Poker but players have not been thrilled with the scheduling or the content of the series.

Party Poker recently announced that it would be hosting a $500,000 New Jersey Championship of Online Poker to coincide with the WPT World Championships at the Borgata Casino at the end of April (19th – 27th), but despite revising it, adding five more tournaments and increasing the total value of the guarantees to $600,000, Party Poker are learning the hard way that you cannot please all of the people all of the time.

When the preliminary schedule for the New Jersey Championship of Online Poker (NJCOP) was announced last week on the 2+2 poker forum, players were asked for their comments and suggestions. The backlash against the series was astonishing, with Party Poker severely criticised for simply replacing the daily $10K and weekend $50K tournaments with events offering a higher guarantee, and the general consensus of opinion being that the site had been lazy in preparing the series – and cheap compared to the $1 million WSOP Online Championships that were held in January.

The biggest criticism of the timing for the NJCOP was that it should have been scheduled weeks earlier to coincide with the start of the Borgata Spring Poker Open (April 8th) – when more players would be in the State to compete in the Borgata live poker series; rather than at the end of the series, when only players with substantial bankrolls would be around for the $15,400 buy-in Championship Event.

Prior to revisions being made, the schedule was also criticised for relying exclusively on NL Hold´em events, rather than having a multi-discipline Championships. The new schedule now includes a $50.00 re-buy PLO Event, but this has already been criticized for having a full-ring format when every other PLO game on Party Poker is played at 6-Max. A “Players Choice” game has also been included on the schedule, but a widely-demanded HORSE tournament has been excluded as an option because the Party Poker software cannot support games of mixed poker.

The revised schedule for the New Jersey Championship of Online Poker looks like this:

Is This an Opportunity for a Mini-NJCOP?

Possibly Party Poker´s reluctance to move the schedule and include lower buy-in tournaments could be an opportunity for the site to announce a mini-NJCOP when this series is finished, and then claim to have listened to players´ comments (just remember that you heard that here first!).

Players in New Jersey who still believe the schedule for the NJCOP to be uninspiring should visit the dedicated thread on the 2+2 poker forum, although it might be a little late to make your opinions heard as qualifiers for the New Jersey Championship of Online Poker start today!

Can’t wait to see how this all plays out. I know I’ll be rooting for Fabrice Touil to show up and make a stand on this one. Could be a great opportunity for him to come out strong in the year.