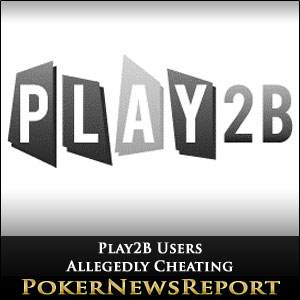 Cheating in online poker is nothing new. Since its inception, there have been numerous accounts of hackers gaining access to their opponents’ hole cards. Over the years, poker sites have taken additional measures to combat these issues, but hackers and other cheats always seem to be one step ahead, especially on smaller sites where security is not as stringent.

Play2B is the latest network to be caught up in an alleged cheating scandal. On July 30th, a Two Plus Two user that goes by the name of DruidFluid claimed that after playing 2,500 hands of Heads-Up poker on one of its skins, he is fairly certain that he was taken advantage of. Shortly thereafter, other players chimed in relaying their questionable experience with one of Play2B’s more than one dozen skins.

The allegations are based on relatively small sample sizes and do not provide conclusive evidence. However, DruidFluid’s compiled statistics do raise some red flags. For instance, the alleged cheaters won over 91% of hands they raised pre-flop, over 95% of the hands where they bet the turn, and an alarming 97.5% of hands where they bet the river. More alarming still, the players in question won 20 big blinds or more 69 times, while their opponents won at least that amount only 5 times.

It would be one thing if DruidFluid were a terrible player, but as stated in the original post:

Let me preface this by saying that I’ve been playing poker for a living for 8 years, played on 15+ sites, and I’ve played around 3 million hands. I’ve never accused a site of being rigged or super-using before.

Based on this statement, it seems like DruidFluid is a competent player.

In response to DruidFliud’s allegations, Play2B responded with a post of its own, informing 2+2 that it takes cheating very seriously and has suspended 5 suspicious accounts. The network is currently investigating the matter and promises to report its finding as soon as the study is complete.

Earlier this month, Douglas Polk posted a similar thread revealing that he was the victim of foul play. PokerStars confirmed that Polk’s account had been compromised, and the vast majority of his funds were returned. The identity of the perpetrator was never confirmed, although Joshua Tyler is suspected.