Although the odds are against an individual player winning the top prize in 888Poker´s latest RushRoller promotion, there is still plenty of money on the tables for players who complete simple challenges, play in RushRoller tournaments and collect Rider Scratchcards. 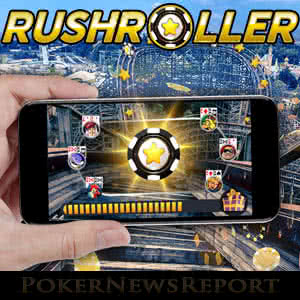 Although the odds are against an individual player winning the top prize in 888Poker´s latest RushRoller promotion, there is still plenty of money on the tables for players who complete simple challenges, play in RushRoller tournaments and collect Rider Scratchcards.

888Poker has launched a new RushRoller promotion for the spring which, although following a format similar to many recent promotions, has a few subtle changes players should be aware of – most notably the addition of Rider Scratchcards for players who compete in multiple RushRoller tournaments.

The promotion runs from today until April 9th and is available to any player who has made a real money deposit into their account. If you have not yet made a real money deposit into your account, details of an exclusive offer not available directly from the site can be found on our [geolink href=”https://www.pokernewsreport.com/888-poker-bonus”]888 Poker bonus page[/geolink].

The RushRoller Promotion at 888Poker

During the promotion, 888Poker will be hosting three RushRoller tournaments each day at 00:10am, 4:10pm and 8:10pm (all times GMT). Each tournament has a $3,000 prize pool and entry is limited to players holding RushRoller tournament entry tickets. Existing real money players should find three entry tickets already in their account, and can win additional tickets by completing “Daily Challenges” and playing the Megaloop Spin Game.

The Daily Challenges are player-specific and based on previous activity at the site. They consist of a:

The free-to-play Megaloop Spin Game is a spin-the-wheel pop-up that appears on the first occasion a player logs into their account each day. The wheel consists of multiple prizes including tournament tickets for $1,000 SuperThrill tournaments (@6:10pm each evening), poker bonuses, casino freeplays and free sports bets. Players logging into 888Poker from their mobile devices after 5:00pm are eligible for a second go at the Megaloop Spin Game to win double the amount of prizes.

The Purpose of the Rider Scratchcards

The tournament ticket prize from the “up to $1,000” scratchcard is an exclusive “Extreme Heights” tournament with a $10,000 cash prize. It is played each Sunday evening at 5:10pm (until April 15th) and only open to players who have won a ticket through the promotion. The cash prizes are self-explanatory, while the bonus prizes have to be cleared at the rate of 3.5 Bonus Points per $1.00 before they can be withdrawn. If you win the top prize, you have defied odds of 100,000-to-1!

The odds of winning the top prize might be a bit extreme, but there is plenty of money on the tables to make participating in this promotion worthwhile. The prize money for the three-times-daily RushRoller tournaments, the daily SuperThrill tournaments and Sunday Extreme Heights tournaments comes to $720,000 over the duration of the promotion. Plus there are the bonuses, casino freeplays and free sports bets available through the Megaloop Spin Games, as well as the cash and bonuses that can be won via the Rider Scratchcards. We believe that´s plenty to keep most players happy this spring!