On Saturday, PokerNewsReport is hosting an exclusive freeroll qualifier to the MicroMillions $1 million guaranteed Main Event with 20 seats up for grabs. 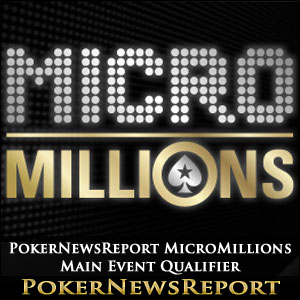 On Saturday, PokerNewsReport is hosting an exclusive freeroll qualifier to the MicroMillions $1 million guaranteed Main Event with 20 seats up for grabs.

PokerStars´ MicroMillions 8 has been running non-stop since last Thursday, and already more than $4 million has been paid out to thousands of winners. The schedule for this coming weekend could see more than another $2 million paid out, as it includes a $300,000 guaranteed edition of the Sunday Storm and the $1 million guaranteed MicroMillions Main Event.

The evening prior to the Main Event, PokerNewsReport is hosting an exclusive freeroll with 20 seats for the Main Event up for grabs – and this could be your chance to win a life-changing amount for free!

The PokerNewsReport MicroMillions Main Event freeroll qualifier gets underway on Saturday at 8:00pm (CET). It is a standard freezeout tournament with ten minute levels and a fairly gentle blind structure; but there is NO LATE REGISTRATION, so you will need to have registered for the qualifier before the tournament gets underway.

Players will each receive 1,500 chips to start with and there are no re-entries or re-buys. If you finish among the top twenty players, you will receive an entry ticket to the MicroMillions Main Event – which you will be able to find under the “Requests” tab at the top of the PokerStars poker client and then scroll down to “Tournament Tickets”.

Where to Find the PokerNewsReport Freeroll

The PokerNewsReport freeroll can be found in the PokerStars client under “Tourney” > “Private” (it has the tournament ID #937778448 if you cannot see it immediately). The tournament is password protected so that only readers of PokerNewsReport get to play in it, and the password you will need is “PKNewsRMM”.

For some reason best known to themselves, PokerStars initially titled the freeroll “Pokernewsrepot Micro Millions” when it first went live in the poker client. They might have got around to changing by now, but will you really care what it is called if you win a seat to the MicroMillions Main Event for free!

Not too Late to Enter the MicroMillions Challenge

Alongside the series of low buy-in events, PokerStars has been running a MicroMillions Challenge. This challenge is open to any player who competes in six or more MicroMillions 8 tournaments irrespective of how you perform, and rewards those who have taken part in the event with an entry into one of two “all-in-every-hand” shootout tournaments depending on how many events you have played in:

You are able to enter the challenge retrospectively (i.e. if you have already played in a handful of tournaments and intend to play a few more this weekend) – simply opt-in to the challenge with the PokerStars Code “MM8” in the “account” tab of the poker client.

Probably a Bit Late to Win Player of the Series

There is also a “Player of the Series” leaderboard competition running alongside the PokerStars MicroMillions tournaments which rewards the winner with free Sunday Million tickets for the next six months. Currently the top of the leaderboard is dominated by Russian players (they occupy eight of the top ten spots), but the competition pays out all the way down to 100 places, so there still may an opportunity to win one Sunday Million ticket (worth $215.00), but it would take a stunning weekend to top the leaderboard at this late stage.

Never mind – because you could win a seat in the MicroMillions Main Event via PokerNewsReport´s exclusive qualifier, and win more than enough money to enter every Sunday Million tournament for the rest of your life!