A new bill could eventually see Nevada accept online poker players from other states with similar legislation to its own. 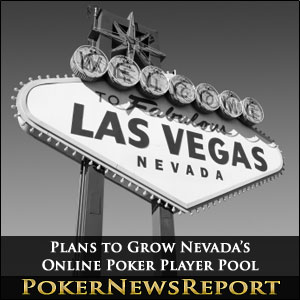 A new bill could eventually see Nevada accept online poker players from other states with similar legislation to its own.

The bill, which was submitted this week to the Nevada State Gaming Control Board Gaming Commission, seeks to make changes to existing legislation, which would allow the state to make deals with others that have similar online gambling legislation and regulation standards to its own.

This means that the Silver State could essentially accept bets from gamblers in other states, as long as a deal existed between them.

The main advantage of this type of bill is that the poker player pool in Nevada would grow considerably, making it more feasible for operators to open online poker rooms now that the legislation to do so is in place.

Current laws in Nevada dictate that state based sites can only accept bets from online gamblers who are located within its borders.

Governor to be Given the Authority

Nevada moved to change the language of the current bill so that if negotiations between the governor and other states eventually did take place, the legislation would already be in existence.

The Nevada Gambling Control Board Chairman, AG Burnett said that it was paramount to “make clear the governor’s ability” if and when he opts to negotiate such agreements with other states.

The move also comes out of growing concern by online poker experts that the market which will be created by poker and casino operators who have successfully being issued licenses by Nevada, will be too small to become profitable.

It is believed, however, that despite these concerns the first interactive poker sites will launch in the state in the coming months. Gaming regulators still need to test and approve the technology that will be used by license holders. At present, 17 operators have received the green light from Nevada to offer their services, but the final running of their sites will only happen once the technology has been approved.