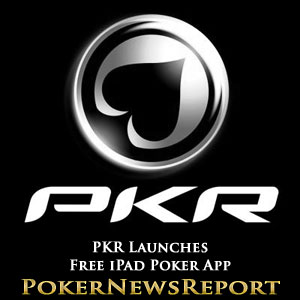 [geolink href=”https://www.pokernewsreport.com/pkr-poker”]PKR[/geolink] has launched a new poker app for UK players. The free real money app will be available for play on iPad and will offer real money cash games and sit ‘n’ go tournaments.

Players are also able to enjoy free practice games. There are plans for multi-player tournaments which are expected to be released later in the year. In addition, players from other countries are expected to have access to the app in the near future.

I’m very pleased to have launched the poker app after several months of hard work by the team, said Leon Walters, Chief Operating Officer of PKR. This release represents one of the most significant steps forward for PKR since our inception in 2006.

We aim to quickly follow this first phase of our efforts to reach the growing mobile poker audience with iPhone and Android versions.

The iPad app includes many of the features that are unique to the 3D online poker room, such as 3D avatars and environments.

As you can see, much of what makes PKR so unique – avatars, environments and emotes – has been retained in the iPad version, delivering iPad poker at its best, read a statement released by PKR.

According to a statement from PKR, The world’s most advanced iOS poker app is here! With video game graphics, this full 3D experience is brought to you by award-winning online poker room PKR.

Stand up, celebrate and push all in with the most realistic and fun poker game ever to hit your mobile device.

Players are looking forward to this new app, enabling them to play top quality poker on the go. The app is designed specifically for play on tablet devices, making use of its size and special features, together with the new generation poker room, PKR’s impressive 3D gaming environment.