Pieter de Korver won the Berlin Cup at the weekend – the first side event of EPT Berlin Season 9 – thanks to two backdoor flushes and a flopped Queen. 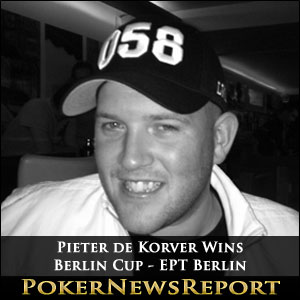 Pieter de Korver won the Berlin Cup at the weekend – the first side event of EPT Berlin Season 9 – thanks to two backdoor flushes and a flopped Queen.

Filatov Goes Up as Geshbenkein Blows Out

Chip leader Anatoly Filatov could have not enjoyed a better start to the day – dismantling Vladimir Geshkenbein´s chip stack with a rivered two pair against his compatriot´s top pair – before Geshkenbein got the last of his chips in with A♠ 8♥ against Sebastian Gohr´s pocket Tens, and failed to connect with the board to be eliminated in eighth.

Gokhan Onal and Eric Scheidt then departed in quick succession – Onal running his pocket Nines into the A♣ K♠ of Esben Guenther with the K♦ flopping to pair Guenther up, and Scheidt coming second in an AJ > KJ race against Pieter de Korver when both players missed the board. Onal and Scheidt were eliminated in seventh and sixth respectively.

The first of Pieter de Korver backdoor flushes came with the elimination of Esben Guenther in fifth. The Norwegian (K♣ J♦) had got all his chips in on a flop of A♦ K♦ 5♦ and was ahead of de Korver´s Q♦ Q♥ until the river 6♦ gave de Korver a better flush and the chip lead. Shortly after Jonas Garstick (8♣ 8♦) was to leave the game in fourth when Sebastian Gohr flopped Jacks and Kings before, de Korver was at it again.

Following a three-way deal which left the trophy and €30,000 to play for, de Korver became the aggressor and got all his chips in the pot with Q♣ K♠. De Korver was called by Anatoly Filatov (9♣ 9♥) and after the flop and turn of 3♠ 8♣ A♣ / 7♣ it looked as if the Russian had made a great call, but the K♣ spiked on the river to give de Korver his second rivered flush over flush KO.

Heads-Up Over Quickly Thanks to Flopped Queen

With such a big chip advantage, the heads-up between Pieter de Korver and Sebastian Gohr was never going to last long. Eventually, Sebastian Gohr ran his 2♦ 2♠ into the Q♦ 10♣ of Pieter de Korver and, with the board running A♥ Q♥ J♠ / 4♦ / 6♣, the Dutchman had won the Berlin Cup and €145,400 first prize almost four tears to the day since his triumph in the Season 5 EPT Grand Finale.

An exhausted and emotional de Korver was elated with his victory when interviewed after the event. The Dutchman has not been seen at many EPT events since his 2009 EPT Grand Final victory, but said that he was likely to play in more in the future – after he had got some sleep to prepare for the EPT Berlin Main Event.