New Zealander Phillip Willcocks took a last level chip lead in the Aussie Millions Main Event on Day 2 to head the 109 survivors as they approach the money. 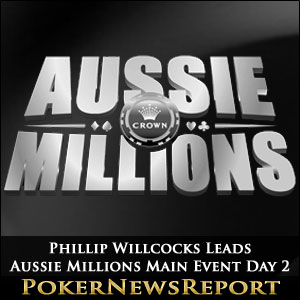 New Zealander Phillip Willcocks took a last level chip lead in the Aussie Millions Main Event on Day 2 to head the 109 survivors as they approach the money.

The leaderboard for the Aussie Millions Main Event was turned on its head during the last level of Day 2, as players emerged from nowhere to take the pole positions ahead of those who had been gradually developing their chip stacks throughout the day.

With the exception of Gareth Dwyer and Darren Rabinowitz, none of the players in the top ten chip counts below featured among the leaders at the start of the last level of the night; and, as the chips started flying in, Phillip Willcocks emerged as the Main Event chip leader after Turning a straight against his opponent´s flopped set.

Willcocks was one of only three players to bag up in excess of 500,000 chips after six levels of play at the Crown Poker Rooms in Melbourne, with Sorel Mizzi and Gareth Dwyer being the other two. The three chip leaders have a significant chip advantage over Martin Rowe (463,900 chips) – who started Day 2 as chip leader, disappeared into virtual obscurity and then finished with a bang to claim fourth spot overnight.

During the first level of Day 2, the Aussie Millions Main Event prize pool was announced along with details of who will get what. After a handful of late registrations (including 2007 Aussie Millions Main Event champion Gus Hansen), the total number of entries into the tournament was confirmed as 668 – the biggest turn out for three years – which created a prize pool of AU$6,680,000 (US$5,960,000).

Mixed Fortunes for the Big Names

Although some of the biggest names in poker were sent to the rail during Day 1C of the Aussie Millions Main Event (Negreanu, Ivey, Shak, Haxton etc), there were still plenty of scalps up for grabs of Day 2. Patrik Antonius, Viktor Blom, Ole Schemion and Billy “The Croc” Argyros were among the players to join Gus Hansen on the rail, along with last year´s Aussie Millions runner-up Joseph Cabret, who was crippled Q♥ 9♣ < Q♠ 10♠ when he missed his gutshot straight draw.

Big names to carry solid stacks through to Day 3 of the Aussie Millions include PokerStars pros Liv Boeree, Jason Mercier and Jonathan Duhamel; while Scott Seiver, Antonio Esfandiari and John Juanda also feature among the top chip counts – Juanda (2♥ 2♣) living up to his pseudonym of “Luckbox” by rivering a set of Deuces in the last hand of the night to best his opponent´s (A♣ K♣) flopped top pair top kicker.

Looking Ahead to Day 3 of the Aussie Millions Main Event

With just over 100 players remaining in the 2014 Aussie Millions, the 72-player money bubble should burst on Day 3. After a level of play was lopped off the Day 2 action, players will be entering Level 14 (blinds 1,500/3,000 – ante 500) when they return to the Crown Poker Rooms in Melbourne tonight in pursuit of a seven-figure payday.

Although the first couple of levels are likely to be a little tense, those we expect to get a better night´s sleep include: