The latest Global Poker Index (GPI) listings have been released, and they show that poker great Daniel Negreanu has been knocked off the #2 spot. 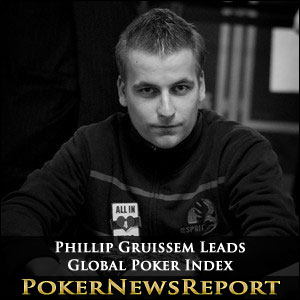 The latest Global Poker Index (GPI) listings have been released, and they show that poker great Daniel Negreanu has been knocked off the #2 spot.

German poker player Phillip Gruissem has taken over Negreanu in the rankings after he jumped four spots in the last week. Gruissem’s surge can be attributed to his solid performance at the GuangDong Ltd Asia Millions in Macau last week, where he came third in the No Limit Hold’Em event.

He also had two stellar performances in April, winning the AUD$50,000 No Limit High Roller Rebuy event at the WSOP Asia Pacific and the Caesars Cup Invitational in the Australian city of Melbourne.

With a total score of 3377.97, Jason Mercier still retains his grip on the top spot in the GPI. He is over 234 points ahead of Gruissem, meaning that he likely to stay in the top spot should he keep up his solid play in the near future.

The rankings are also likely to put a smile on the face of Paul Volpe, who has made it into the top ten of the list. Volpe jumped five places to claim #8 on the GPI following his performances at a number of WSOP events thus far. Volpe also took out two tournaments at May’s EPT Grand Final in Monte Carlo, which also put him on the GPI’s radar.

David Peters has had a huge ascension up the rankings, jumping a whopping 89 places to be #19 on the GPI. Peters has been in the money at four events in the WSOP thus far, which has helped give him a huge boost in the rankings.

The biggest reason for Peters’ sudden surge, however, was the Hendon site’s recent database movement of a number of Peters’ previous cash wins. Those cashes, which had previously been attributed to another player of the same name, have also helped Peters break into the GPI’s top 20.

Isaac Haxton has had an even bigger surge, shooting up from 210th on the GPI to 85th. Like Gruissem, Haxton also had a stellar performance at the GuangDong Ltd Asia Millions, winning over $1.6 million in two tournaments at the event.

A player who has not fared so well in the GPI rankings is Taylor Paur. Despite taking out the WSOP $1,000 No Limit Hold’em event (#18) earlier this week, Paur slipped 19 spots to number 73. While unconfirmed, it may be possible that the win was not taken into account in this week’s rankings; given the fact the win took place just two days ago.