Philipp Gruissem last night won the battle of the Germans, when outplaying compatriot Igor Kurganov to claim the £20,500 EPT London Hi-Rollers title and a winner´s cheque for £450,200. 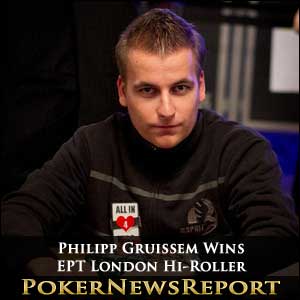 Philipp Gruissem last night won the battle of the Germans, when outplaying compatriot Igor Kurganov to claim the £20,500 EPT London Hi-Rollers title and a winner´s cheque for £450,200.

It was a superb double achievement for Philipp Gruissem, who won the EPT HI-Rollers Event in Barcelona in August, and a double disappointment for Igor Kurganov – who had also placed second in the EPT Hi-Rollers Event in Madrid in May.

There is No Easy Way to Win a Hi-Roller Event

Gruissem´s victory was done the hard way – starting the day in seventh place of the remaining eight players and entering the heads up at a 2:5 disadvantage. Possibly because of his lowly start, there was as much time discussing deals at the final table as there was playing cards, and eventually a deal was reached when only four players were left. Unfortunately, as it turned out, while Gruissem held a narrow chip advantage.

The first player out went in the very first hand of the day. Michael Tureniec, the shortest stacked of all the players, shoved all-in with KJ. He was called by Olivier Busquet (AJ), who was still in the game thanks to the fortunate elimination of James Bord the previous evening, and although a King on the flop gave Tureniec hope of doubling up into third place, the Ace on the turn busted his dreams and any chance he had of winning the hi-rollers event. Possibly, with WSOPE starting today, he had a plane to catch!

Three Gone Within An Hour

Sam Trickett was next to depart the table. Having been caught defending his blinds by Igor Kurganov, the German then extended his overnight chip lead by committing Sam (K♦ J♦) to the pot with his own A♣ 9♣. Sam had plenty of outs after the flop of Q♦ 4♣ 5♦ and turn of 10♠, but failed to catch on the river card of 10♣ and was sent to the rail in seventh place. In the next hand Philip Gruissem (A♠ Q♣) dominated Joel Nordkvist´s K♠ Q♥ and we down to our final five within an hour of play starting.

The German friends share the demolition of the rest of the field over the next few hours. First Gruissem rivered a full house to best Adrian Bussman´s trip Fives, before Igor Kurganov got his stack in pre-flop with A♣ K♦ against Olivier Busquet´s A♥ Q♠, and Kurganov´s Q♦ Q♥ then held up against Rob Avery´s A♣ J♣ to send the UK poker player to the rail in third for a healthy £120,500 payday.

After another lengthy break for a discussion about a deal, the two players returned to the table with Kurganov holding a 5:2 chip advantage. However, Gruissem levelled the playing field in the early hands by winning three valuable uncontested pots and continued to chip away at Kurganov´s stack with very few hands going to showdown. Just as he was beginning to feel the pinch, Kurganov got back on level terms with quad sixes, but still Gruissem continued to three and four bet his way into Kurganov´s stack. Eventually, Kurganov snapped and called yet another shove by Gruissem with Q♦ 6♠. Gruissem called with 9♣ 9♥, and although Kurganov was given a little hope with the 6♣ on the flop, the rest of the cards went Gruissem´s way – as did the winner´s trophy and a cheque for £450,200.