Philipp Gruissem takes a significant chip lead into the final day of the WSOPE High Rollers Event, in which thirteen players remain – four spots from the money. 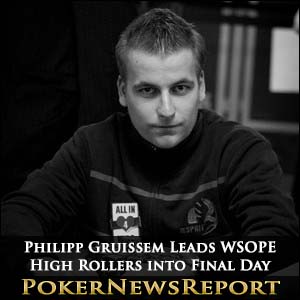 Philipp Gruissem takes a significant chip lead into the final day of the WSOPE High Rollers Event, in which thirteen players remain – four spots from the money.

Thursday promises to be another long day for the players in the WSOPE High Rollers event after a fourteen-hour session on Day 2 of the tournament which saw the field of sixty-seven (after five late registrations) reduced to thirteen – with four players yet to be eliminated before anybody wins any money for their efforts.

At the top of the leaderboard going into the final day is German poker player Philipp Gruissem, who won the non-bracelet High Roller Event at the WSOP-APAC back in April and who is the only player among the survivors from Day 2 to have stacked up more than a million chips. Gruissem (1,296,000 chips) holds a substantial advantage over Scott Seiver (770,000 chips) and Jason Koon (702,000 chips) with Erik Seidel (610,000 chips) and Daniel Negreanu (411,000 chips) among those in the chasing pack.

After a dour first day, there was far more action on Day 2 of the WSOPE High Rollers Event – helped by some sensational hands, including two Royal Flushes within the space of fifteen minutes. Kyle Cheong (A♠ 10♠) was the first player to benefit from the best hand in NL Hold´em poker, when doubling up against Joni Jouhkimainen (Q♥ Q♦) on a board of Q♠ 2♠ J♠ / K♠ / 2♥, and his achievement was quickly mirrored by Guillaume Darcourt (K♠ Q♠) who eliminated Paul Volpe (8♥ 8♠) with the help of a 4♥ 10♠ A♠ / J♠ / 9♣ board.

Even more sensational was the hand in which Jason Mercier (Q♦ Q♥), Zachary Clark (K♦ K♠) and Timothy Adams (A♣ A♥) were all all-in pre-flop, and each hit a set on the board of 2♥ K♣ A♠ / 4♥ / Q♠ – eliminating Clark and crippling Mercier. Once the hand was finished Daniel Negreanu claimed he had folded Jack-Ten, which would have given him a rivered gutshot straight and bust all three players from the tournament.

One of the other reasons that the WSOPE High Rollers was a little livelier on Day 2 was that Daniel Negreanu was on top form. With the absence of Phil Hellmuth (who decided to go to the Aviation Club to play the OFC Tournament instead), it was left to Negreanu to provide the day´s entertainment – and he did not disappoint.

Daniel Negreanu finished the day in seventh place with 411,000 chips – a position which will enable him to collect the WSOPE Player of the Year title (if he finishes seventh or better) after POY leader Matt Ashton was eliminated from the tournament (4♥ 4♦ > K♦ J♠) by Phil Ivey. Matt Ashton did the decent thing by going over to Negreanu and wishing him good luck, but as soon as Ashton was out of the room, Negreanu was out of his seat and pumping his fists in the air. It is fair to suggest that the POY title might mean more to Daniel Negreanu than the €725,000 and WSOP bracelet for winning the event!

Gruissem Recovers to Take the Lead

Philipp Gruissem staged a remarkable recovery from his missed flush draw (above) to storm back into the WSOPE High Rollers chip lead. A double up against Sorel Mizzi (Q♦ Q♣ > K♠ Q♠) gave him enough chips to cover Jason Mercier´s (A♦ Q♥) shove on a Queen-high flop when he was dealt A♣ A♥, and he chipped up over the million mark when his K♠ J♥ made a pair of Jacks to best Byron Kaverman´s A♦ K♥.

After Gruissem had taken the chip lead, there was just enough time remaining for Marc McLaughlin to bust Juha Helppi A♦ 8♣ > A♥ 6♣ and for David Peters to send Phil Ivey to the rail 9♣ 9♦ > 8♥ 5♦ before a halt was called to the day´s proceedings at the end of Level 17. When the players take their seats for the conclusion of the WSOPE High Rollers Event, blinds will be 6,000/12,000 (ante 2,000) with the full chip counts as follow:-