Philipp Gruissem finished Day 1 of the EPT Monaco Super High Rollers ahead of a record-breaking field which has generated a prize pool in excess of €5 million. 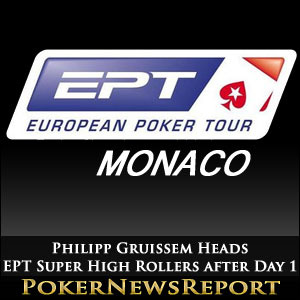 Philipp Gruissem finished Day 1 of the EPT Monaco Super High Rollers ahead of a record-breaking field which has generated a prize pool in excess of €5 million.

The opening tournament of the EPT Monaco Grand Final is the €100,000 buy-in Super High Rollers event which traditionally attracts many of the world´s leading players and which last year caused a sensation when winner Max Altergott recorded his first ever live tournament cash for €1,746,400!

Altergott returned to the tables yesterday at the Monte Carlo Bay Hotel, where he was joined by Tour “regulars” such as Daniel Negreanu, Jason Mercier and Vanessa Selbst, a number of high-stakes cash players who had flown in from Macau and refugees who had bust out early in the WPT World Championships.

Max Altergott was one of a number of players who re-entered the event after being eliminated during Day 1 of the EPT Monaco Super High Rollers – his bust-out hand coming against another re-entry, Vanessa Selbst, whose 4♦ 4♠ made a Full House against Altergott´s trip Aces.

Other players to swell the prize pool by re-entering included Justin Bonomo, Chun Lei Zhou, Lo Shing Fung, Tobias Reinkemeier, Phil Ivey, Igor Kurganov, Antonio Esfandiari, and Daniel Colman (twice); but, as entries remain open until the start of play today, the existing roll-call of forty-eight unique players and eleven re-entries could increased by the time the cards are in the air for Day 2.

After eight one-levels of play, thirty-seven players still remain active in the EPT Monaco Super High Rollers event – led by Philipp Gruissem, who had the good fortune to river a Royal Flush in exactly the same hand that Chun Lei Zhou had attempted an outrageous bluff with 6♦ 4♦.

Gruissem experienced a few roller coaster hands throughout the remainder of the day, but bagged and tagged 1,038,000 chips at the close of play to have a narrow chip advantage over Ping San Chan (938,000 chips) and Daniel Negreanu (915,000 chips).

Negreanu Up – Ivey Down

Two of the world´s greatest players – Daniel Negreanu and Phil Ivey – experienced vastly different fortunes yesterday. Daniel Negreanu doubled up his 250,000 chip starting stack in the first hand he played when rivering a straight with 6♣ 4♣ against Vanessa Selbst´s (A♦ 9♥) paired Ace, and then continued to be a luckbox – busting Patrick Antonius with Trip Eights and taking a valuable pot against Ping San Chan with a rivered Full House over rivered Full House.

Phil Ivey´s day was completely the opposite. His first elimination came at the hands of Mike “Timex” MacDonald, who flopped trip Eights to crack Ivey´s A♥ A♦, and then Ivey struggled through three further levels without seeing a decent opening hand to close the day with 234,000 chips.

Senh Ung was another player to have his Aces cracked when Tobias Renkenmeier turned a Flush with A♠ Q♠, and Mohsin Charania believed his journey all the way from the WPT World Championship was going to be fruitful when his A♣ 9♣ improved to Trip Nines, only for Talal Shakerchi to show 4♥ 3♥ for a turned flush to cripple the American.

Looking Ahead to Day 2 of the EPT Super High Rollers

With entries still open for the EPT Super High Rollers until the cards go in the air at noon, the field could be increased by players who bust out on Day 1 firing a second bullet (Sam Trickett, Steve O’Dwyer, Jonathan Duhamel and Bertrand “ElkY” Grospellier among them) or by more late arrivals from Macau and Atlantic City.

When play resumes, the tournament will be entering Level 9 (3,000/6,000 – ante 1,000) which will mean that players entering/re-entering before the start of play will start with 41 big blinds. Play is scheduled to continue until just eight players remain to contest Saturday´s Super High Rollers final table.