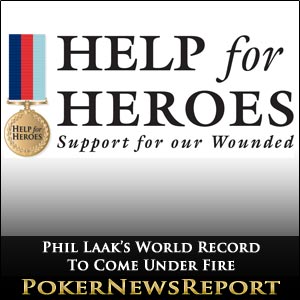 Englishman Barry ‘Jack 8 Potato’ Denson is aiming to break the Longest Marathon Playing Poker By An Individual world record when he sits down at midnight on Sunday, July 1, this year at the G Casino in his home town of Manchester for what will be five gruelling days.

Denson plays the majority of his live poker in The Nuts Poker League – which is a British-based pub tournament – and has teamed up with Help For Heroes, which is a charity that was set up to assist the servicemen and women wounded in Britain’s recent conflicts, to raise funds while hopefully setting a new Guinness World Record.

His record-breaking attempt won’t come easy, though, as he is chasing down the mark set by Dublin-born American poker star Phil ‘The Unabomber’ Laak back in June of 2010.

Denson remains confident in his powers of stamina, saying: “Being an ex-Territorial Army soldier myself, I am pleased to be able to raise money for such a worthy cause.”

Guinness World Records do permit a five-minute break every 60 minutes, although these rests can be held back to accumulate longer breaks. However, Denson does have one concern – that he’ll be able to attract enough opponents to target the new record as opponents are restricted to the number of hours they can face up to the test.

He added: “One of the biggest challenges will be finding enough players to play me. Guinness World Records will only allow other players to play for up to four hours at a time, so we need as many players as possible to come along and take part, especially in the early hours or the mornings.”

If you are interested in helping Denson by giving up four hours – as well as Britain’s veterans with donations – or just fancy watching this momentous occasion, then get on over to www.justgiving.com/poker-marathon.