Phil Laak and Antonio Esfandiari compete in a heads-up event at the Playground Poker Club in Montreal that will feature a potential ‘humiliation’ penalty for the pros. 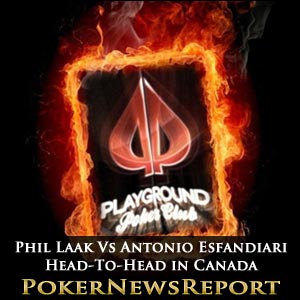 Montreal in Canada is the place to be come early next month – as poker superstars Phil Laak and Antonio Esfandiari compete in a $2,200 buy-in No-Limit Hold’em heads-up event at the Playground Poker Club that will feature a potential ‘humiliation’ penalty for the pros.

The four-day competition – which will see the heads-up event run as a best-of-three tournament – will take place from March 1 to 4 and is named after the two pros, so it’s a warm welcome to The Laak & Esfandiari Open.

Additionally, there will be a $550 buy-in No-Limit Hold’em Deepstack tournament running – which will also have a penalty for the competitive duo – after the heads-up competition, with both events featuring two starting flights to guarantee lots of chances for high-quality action.

However, the heads-up tournament has been given a 32-player cap because of time constraints, so seats will be at a premium and those arriving first with the buy-in will be guaranteed of a place at the felt.

‘Humiliation’ Penalties in Place for Pros

‘The Unabomber’ and ‘The Magician’, meanwhile, can’t seem to pass up the opportunity to humiliate each other, with this latest tournament seeing the good friends agree to two proposition bets that will surely be among the highlights of this jaunt into Quebec.

While the penalties have yet to be revealed, Iranian Esfandiari – a former Team Ultimate Bet player – and Dublin-born Californian Laak did make it known that whichever player busts out first during the heads-up competition will receive his forfeit as other players and spectators are in the poker room.

The second punishment will come after the opening flights of the deepstack tournament as the Day 1a players will act for Team Laak and the Day 1b competitors will represent Team Esfandiari.

Revenge Could be on the Cards

The beaten captain will then face that second forfeit, which should prove extremely interesting as the first penalty will have been administered a few days earlier – so there could well be some chance for revenge.

Laak, 39, and 33-year-old Esfandiari, who each have one World Series of Poker (WSOP) bracelet, won’t be the only big-name pros in attendance for what is sure to be a fun and exciting few days, of course, with the likes of Canadian duo Mike ‘Timex’ McDonald – the Epic Poker League (EPL) event two champion from The Palms Casino Resort in Las Vegas last September – and one-time WSOP Europe champion Erik Cajelais also lined up to play.

Additionally, National Hockey League Hall of Fame member Guy Carbonneau – who starred as a centre with ice hockey team Montreal Canadiens for many years – will join the many competitors in Quebec.