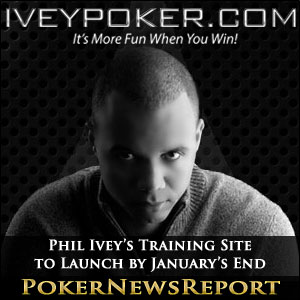 Finally, the wait is over. After a seemingly endless delay, vaulted poker pro Phil Ivey will celebrate the launch of his Ivey League poker teaching site.

Known in most circles as the greatest player to ever play the game, Ivey has until recently strayed away from sharing his intimate knowledge of the game with others – but no longer. To assist him, the nine-time WSOP champion has employed a multitude of today’s top pros. Names like Greg Merson, Jen Harman, Patrick Antonius and Dan Smith headline a list of over 30 noteworthy professions, each one boasting an impressive live and online resume.

In order to raise public awareness, Ivey has partnered with ShoBox, The Next Generation. Ivey League would be a primary sponsor for the boxing broadcast, which ran last Friday night. Just as Ivey League hopes to elevate the game of tomorrow’s stars, Shobox features up-and-coming boxers as they rise through the ranks.

In many ways, Phil’s alignment with Shobox makes perfect sense. For one, there is a great deal of overlap between the boxing fan and poker player demographic. Both are primarily comprised of 20-something males with a thirst for competition. Furthermore, Ivey himself is a big boxing fan, admiring the commitment required to become a world champion.

Ivey League will provide registered users with downloadable video tutorials, each of which will focus on a different aspect of the game. Ivey’s conglomerate of pros will instruct players on how to play poker the right way, offering valuable tips and practices along the way.

IveyPoker.com launched a social media app on Facebook last year. There, players can hone their skills at against real life opponents, at no cost to their person. The app also offers free and purchasable video tutorials, where pros discuss a wide variety of topics ranging from short-handed play to advanced sit-n-go strategies.

In preparation for the launch, Ivey recently headed down to Cabo to film content for the series. While on location, online MTT pro Griffin Benger recorded an extensive video detailing his recent win in the PokerStars 500.

No release date has been announced, but Ivey League is expected to go live sometime over the next 10 days. Be on the lookout. And if you’re interested in checking out what all the hoopla is about, head on down to IveyPoker.com.