Phil Ivey’s ex-wife has petitioned the Nevada Supreme Court to disqualify the judge who ruled on the couple’s divorce case because Ivey donated money to the judge’s re-election campaign. 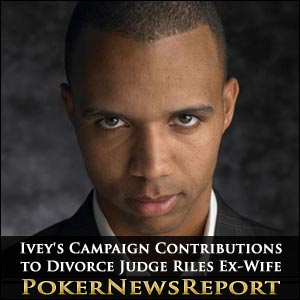 Phil Ivey’s ex-wife has petitioned the Nevada Supreme Court to disqualify the judge who ruled on the couple’s divorce case because Ivey donated money to the judge’s re-election campaign.

Luciaetta Ivey claims that the poker superstar’s donation to Family Court Judge Bill Gonzalez reeks of judicial impropriety. The uncontested divorce was granted in December 2009, and Ivey contributed to the judge in the early part of 2010.

“The public is entitled to know that impartiality is the rule for the judiciary,” the petition stated. “Further, Luciaetta is entitled to fairness and the appearance of fairness before this court and recusal is the only way that she can be sure to receive both.”

Luciaetta’s filing raises concerns about possible conflicts of interest that develop when judicial candidates accept campaign contributions from parties or lawyers who have or had a case before them and about state guidelines regarding when such contributions should result in a judge recusing himself from a particular case.

One expert on legal ethics who read over the petition felt that it would be in the parties’ best interest to assign a new judge to the divorce case in order “to ensure public confidence.”

Jeff Stempel, a law professor at the University of Nevada Las Vegas, said Nevada’s statute on judge disqualification was rather weak and that the state tends to favor keeping judges on the cases that are originally assigned to them. The Nevada Supreme Court has, in the past, rejected various recommendations for imposing stricter disqualification standards, Stempel said.

Luciaetta Ivey, now residing in Tampa, Fla., hired attorney Bruce Shapiro in March after thinking about and questioning the fairness of the divorce settlement. Shapiro told her about her ex-husband’s campaign contributions to the judge.

“I was blindsided,” Luciaetta Ivey said. “I was very upset. I was very disgusted.”

Luciaetta Ivey filed a motion in June in Clark County Family Court that raised several new issues in her divorce case. The motion was scheduled to be in front of Judge Gonzalez, but Luciaetta Ivey objected, filing an “affidavit of implied bias or prejudice,” which was based on Phil Ivey’s campaign contributions.

Gonzalez then filed an affidavit stating his belief that he was “capable of rendering judgment in this matter in a fair and just manner.”

Stempel said that the judge’s comment suggests that Gonzalez applied a wrong standard in his refusal to step down from the case.

“Judge Gonzalez’s personal view as to his ability to be impartial is irrelevant,” the law professor said. “What is relevant is whether a member of the public would have reasonable concerns over his impartiality.”

Luciaetta Ivey then brought the matter before the Nevada Supreme Court, saying “that it would appear improper, even unseemly, for Judge Gonzalez to be able to hear a matter involving his largest individual campaign contributor.” The case is now on the docket of Judge Gonzalez for next Tuesday.

Luciaetta Ivey’s petition before the high court claims that her ex-husband donated $5,000 to the judge’s campaign on April 17, 2010. Stempel said that the poker pro’s contribution to Gonzalez “obviously” meant that he was satisfied with the divorce decree “and may have anticipated possible challenges.”

Nevada law has no limits on the amount of contributions that judges may accept from parties or lawyers appearing before them, but the law does bar judges from hearing cases in which “actual bias or prejudice for or against one of the parties,” could be an issue. The Nevada Supreme Court ruled in 1977 that “recusal would be a necessary step to alleviate or obviate” even the slightest appearance of improper conduct.

The Nevada Code of Judicial Conduct states that, “A judge is disqualified whenever the judge’s impartiality might reasonably be questioned.”

The “total community income” of Phil and Luciaetta Ivey was almost $8 million in 2008, according to tax returns cited in Luciaetta Ivey’s petition.

Phil Ivey has won eight World Series of Poker (WSOP) championship bracelets and is in a fifth place tie on the WSOP’s all-time list. However, he refused to play in the 2011 WSOP events, which concluded last week with Pius Heinz of Germany capturing the WSOP Main Event title along with $8.7 million.

Phil Ivey stated that he was “embarrassed” that Full Tilt Poker, his sponsor, had not reimbursed players who were owed money by the poker site after the Department of Justice shut down the poker room in April in the Black Friday fraud and money laundering allegations.

“I am not playing in the World Series of Poker as I do not believe it is fair that I compete when others cannot,” Ivey stated “I am doing everything I can to seek a solution to the problem as quickly as possible.”

Ivey also filed a case in June in Clark County District Court, alleging that Tiltware, the California-based parent company of Full Tilt, damaged his reputation because of his affiliation with the poker site.

Ivey has earned more than $5 million in WSOP events and over $13.8 million in his tournament poker career.