The final table for WSOP APAC #3 produced one of the most exciting final tables for years, with Phil Ivey claiming the bracelet after an epic heads-up dual. 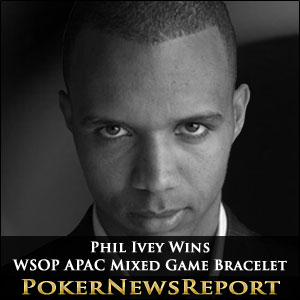 The final table for WSOP APAC #3 produced one of the most exciting final tables for years, with Phil Ivey claiming the bracelet after an epic heads-up dual.

The WSOP organisers may be coming under criticism for devaluing a bracelet´s value – there has not been a prize pool as low as what was seen in Event #3 for almost a decade – but they must have been delighted at the headline names that made it to the final table for the third WSOP APAC event.

Lining up at the start of the 8-discipline event, the relative chip counts looked like this:-

The first hand of the day brought the two chip leaders closer. Phil Ivey followed Daniel Negreanu all the way to the river in a hand of 7 Card Stud, for Negreanu to show three Kings at the showdown. However, Ivey quickly recovered to take a valuable hand from Brandon Wong in the Pot Limit Omaha round and then got his revenge on Negreanu in the first round of Razz – taking the PokerStars pro all the way to fifth street before Negreanu mucked his cards.

Brandon Wong has appeared on three previous WSOP final tables without winning a bracelet, and he improved his hopes of being fourth time lucky with the elimination of Kevin Song in the second round of Pot Limit Omaha.

Having been the initial aggressor on the flop of 7♣ 9♣ 2♥, Song (9♥ 7♦ A♥ K♥ for two pairs) found himself three-bet by Brandon Wong (10♠ 8♠ 9♦ 6♣ for one pair and straight/flush options) and then raised again on the turn 6♦ (Wong completing his straight). Song made the call, but was eliminated in sixth when the 4♣ was dealt on the river.

Kevin Wong was also responsible for Rob Campbell´s elimination in fifth place – but only after Campbell had been crippled in consecutive hands by Graeme Putt and Daniel Negreanu during the Seven Card Stud Hi/Lo round.

Campbell played the last of his chips in the final hand of the Seven Card Stud Hi/Lo round and was called by Putt, Ivey and Wong – the three would-be assassins checking down the hand to the river, where Brandon Wong took the hand with nothing more than a pair of Sevens.

Daniel Negreanu had chipped up nicely during the Seven Card Stud Hi/Lo round, but had lost a significant proportion of his chips in the 2-7 Triple Draw round when Phil Ivey caught a “perfect” (7-5-4-3-2) on the final draw, and then Negreanu donated a further 20,000 chips to Brandon Wong´s cause in the NL Hold´em.

Negreanu´s ultimate demise came at the hands of Brandon Wong in a round of Pot Limit Omaha. With the board already showing A♣ 10♣ 4♥ / 7♠, Wong (A♠ 10♦ K♣ Q♠ for two pair) put Negreanu (Q♣ 9♣ 5♥ 6♥ for straight and flush draws) all-in. Unfortunately for Negreanu, he missed all his out when the 4♦ completed the board and he was out of the tournament in fourth.

Graeme Putt´s excellent performance was cut short during the Seven Card Stud round of Level 17 (Ante 1,000, Bring In 2,000, Completion 5,000) and again the vanquisher was Brandon Wong.

Phil Ivey (who was currently the chip leader due to a strong run in the previous round of NL Hold´em) brought in, Brandon Wong completed and Graeme Putt raised. Wong called but Phil Ivey got out of the way.

A very close heads-up followed in which the chip advantage swung one way and then the other. Phil Ivey eased back into the chip lead during the 2-7 Triple Draw, only for Wong to recover during the next round of Seven Card Stud in which he hit a fifth street straight to reduce Ivey to 170,000 chips.

Wong then took both Hi and Lo pots in the only hand of the following Omaha O8 round to go to showdown before Ivey struck back in the next round of the 2-7 Triple Draw with another “perfect” before levelling the chip counts during the next round of NL Hold´em.

Nearly four hours after Graeme Putt´s departure and 180 hands later, Phil Ivey eventually got the breakthrough he needed. Having extended his chip advantage during the FL Hold´em round due to a flopped straight, he crushed Brandon Wong by betting through four rounds of a hand of 2-7 Triple Draw before Wong – reduced to his last 5,000 chips – was dealt an Ace on the final draw and mucked his hand to another bet from Ivey.

In the next hand, Ivey again applied the pressure and tabled 10-9-8-3-2 against Wong´s 7-6-4-3 with one draw to come. Ivey stood pat while Brandon Wong exchanged one card – needing to hit a 10 or lower without pairing a card in his hand. Unfortunately for Wong, he was dealt a Queen and the Phil Ivey had won his ninth WSOP bracelet – and the lowest first prize payout in a WSOP event since Men Nguyen won the $1,500 Ace to Five Triple Draw Lowball for $43,520 in 2003.