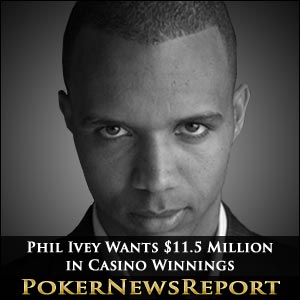 This is yet another controversy for Ivey who over the past year has been a magnet for negative attention. Ivey’s other problems have been related to his divorce and his association with Full Tilt Poker. This one with Crockfords has to do with the fact that the casino finds Ivey’s huge winnings are highly suspicious.

The basic facts are that over the course of two days during a 7-hour period Ivey played Punto Banco, a baccarat variation, with a starting bankroll of 1 million euros. This was in August 2012 during a bank holiday at Crockfords which is in London’s Mayfair and is owned by Malaysia-based Genting. Ivey’s massive win caught the attention of casino employees.

In addition to his big payout, Ivey’s companion raised suspicions further. Accompanying the poker champion was a woman who had been suspended by another Mayfair casino. Although Ivey requested that his winnings be posted to his bank account, at this point the casino, which is actively investigating the incident, only deposited his original stake.

Genting flew investigators from its headquarters in Kuala Lumpur to London to interview those who had contact with Ivey during the period that he played Punto Banco and to review hours of recorded film via surveillance cameras. Various staff members were being interviewed to determine if there was any collusion. This included a Crockfords female croupier. The investigative team also examined the cards and the shoe from which they were dealt.

At this point no charges have been filed and it does not appear that police have been called in. Lawyers from both sides are at a standoff as Ivey, who has won a total of 8 WSOP bracelets, made it to 28 final tables and cashed 51 times, waits for his cash.

As of late Ivey has had troubles related to his divorce. The poker megastar stopped paying alimony to his ex-wife last year after he claimed the Full Tilt debacle had caused him financial problems. Rumors started to circulate that Ivey, who has won more than $5.8 million at the WSOP and is estimated to have won more than $15 million at poker tables, was broke. That rumor may have also caused Crockfords to become suspicious.

Ivey returned to the 2012 WSOP after announcing that he would not play in the 2011 event. Ivey did so in protest to the fact that U.S. players did not receive cash from their accounts when Full Tilt was closed down by U.S. federal agents and went belly-up. In this year’s WSOP he made it to five final tables and cashed in seven events. The investigation by Crockfords is ongoing and it’s unknown when it will be concluded. At this point, Ivey’s winnings are being held indefinitely.