Phil Ivey vs. Crockfords Casino Revealed! Who has the edge? 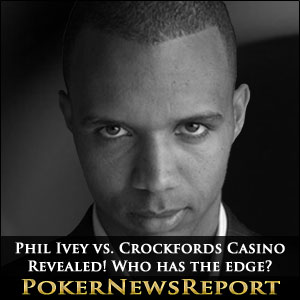 The lawsuit Phil Ivey filed against Crockfords Casino continues outside court as the poker community eagerly awaits the verdict.

What started as just one of the hundreds of topics on the two plus two forums transformed rapidly into one of the hottest subjects around. It’s not even Ivey vs. Crockfords anymore; the trial that started last week is actually a battle between the poker community and the foe commonly known as ‘The House’.

Most of the users support Ivey’s case saying that the casino should have brought down the American much, much earlier, during his night punto banco sessions in London. There are still questions left to be answered, questions like why did the casino accept Ivey’s conditions? Or why didn’t they stop the high stakes game when it became clear that the poker legend was a clear winner? Instead, Crockfords chose to let him gamble and win £7.7 million. As a result, they only repaid him his initial stake of £1 million and refused to consider the possibility of wiring his profits.

Basically, what they did was freerolling Ivey. If the casino had won, they would have taken his money; since the American won that time, The House just gave him his initial money back.

The poker player made a strong case in the past days both on national television and in court. According to Fox Sports, during the 60 Minutes Sport interview with James Brown, he said:

I’m viewing the casino as my opponent. It’s my job to try to exploit weaknesses in the house and try to give myself the best opportunity to win.

He even admitted in court that he made good use of the edge sorting technique which involves studying cards for imperfections. Nevertheless, the poker player defended himself saying that the technique is lawful and it’s not actually ‘cheating’. BBC reports:

I consider all the strategies I use to be lawful and I would never cheat in a casino. It is not in my nature to cheat and nor would I risk my reputation by acting unlawfully in any manner.

In the televised interview, Ivey described how he proceeded: in order for him to gamble a few million dollars, he reached an agreement with Crockfords Club to have a specific brand of playing cards (with tiny imperfections on the back), a shuffling machine and an Asian dealer. He also wanted the same card decks to be used. But when he was asked why a Chinese dealer and what role did his Chinese friend have (he was accompanied by Cheung Yin Sun known as Kelly), the Tiger Woods of Poker became very evasive.

The same happened in the Borgata case where the American won $9.6 million.

The other part in the trial, Crockfords Casino claims that the gambler deceived the staff and told them that he was just being superstitious and not edge sorting. As a result, Ivey’s conduct defeated the premise of the game, meaning the gaming contract was void.

Since it’s a civil lawsuit, the trial is not about cheating, is about the contract law in UK or as two plus two user Hitch-22 puts it in one of his posts:

The important point to note thought is that this case is not an examination of the UK’s law on what constitutes cheating in casinos. It is entirely about the legal principles of contract law; whether a contract exists, has been breached, and if so, whether the contract was voidable by reason of common law fraud.

The poker player responded to this allegations by saying that the casino was in full control of the game and had the option to decline the requests made which turned the odds in his favor.

Putting it bluntly, he played, he won and they ought to pay up…If the casino fouls up from start to finish, that’s the gamblers good fortune.

The case is expected to finish sometime this week. Be sure to check PokerNewsReport on a daily basis for updates and for the eagerly expected verdict.