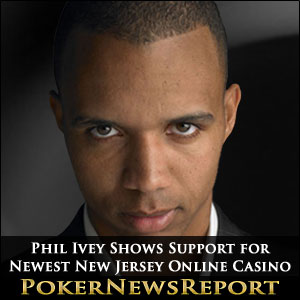 Legendary poker player Phil Ivey is not known to be the most vocal gambling spokesman. So when he emerges from his shell to endorse an online gaming site, the community generally takes notice.

That’s exactly what happened on Wednesday, when Ivey threw his support behind PalaCasino.com. As part of a three line blurb posted on social media site Twitter, the poker icon both congratulated the site on its launch and suggested that others check it out.

Pala Casino is the latest online casino to find a home in New Jersey’s regulated market. The site is operated by real-money and social gaming tech provider Pala Interactive, which itself was founded by the San Diego County-based Pala Band of Mission Indians. With the launch of its online casino on Monday, the Pala became the first tribal faction to successfully enter the US regulated iGaming industry. Pala Casino is currently nearing the end of its five-day soft launch period, and pending any unforeseen difficulties, will open to the masses this Saturday.

Although the Pala had submitted its license application to New Jersey’s regulatory committee (DGE), over a year ago, it wasn’t until recently that the tribe forged a partnership with the Borgata Casino and Hotel. New Jersey regulations require that all iGaming operators be affiliated with an Atlantic City-based brick and mortar casino.

It is presumed that the Pala’s New Jersey operation will serve as a fertile testing ground for if and when the tribe launches its unique brand of online poker in California’s much larger market. Although California lawmakers have yet to legalize online poker, the issue has been discussed at length, and it appears likely that next year’s legislative session will result in the adaptation of an iGaming bill.

Ivey involved with Pala since 2013

As it turns out, Phil Ivey’s history with the Pala extends back to July 2013, when he signed a deal to become the brand ambassador for Pala Interactive. The nature of the deal was such that it only applied to the company’s online poker and casino efforts in California, although the agreement could be extended to include other states, should the situation arise.

Rumors that Ivey and Pala Casino abandoned their partnership began swirling in early-November when it was learned that the tribe had forged a partnership with the Borgata. The Atlantic City casino and Ivey are currently tangled in an ugly $9.6 million lawsuit, with the Borgata accusing Ivey and a colleague of employing cheating tactics to expose flaws on the backs of cards, and using the added information to their advantage. Ivey lost a similar lawsuit against London’s Crockford Club in October.

Based on this apparent conflict of interest, it appears highly unlikely that Ivey will support Pala Interactive’s New Jersey operation in any material fashion.