Phil Ivey’s new website that is gearing up to provide poker training and free-play action has added James “Flushy” Dempsey to its lineup of pro instructors. 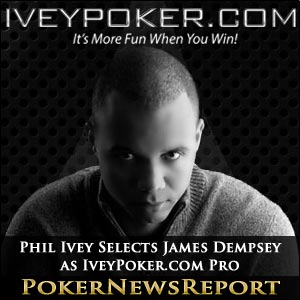 Phil Ivey’s new website that is gearing up to provide poker training and free-play action has added James “Flushy” Dempsey to its lineup of pro instructors.

The 30-year-old former Full Tilt Red Pro has 10 years of pro experience on his resume, first as an online phenom followed by a transition to the live arena. Dempsey has won more than $2 million in live tournaments, including a WSOP bracelet and World Poker Tour championship. The Brighton, England, native is an avid golfer and is described on IveyPoker.com as being proficient in Hold’em and both Omaha and Omaha Hi/Lo.

Dempsey joins Ivey, Patrik Antonius, 2012 WSOP Main Event champion Greg Merson, Jennifer Harman, and Cole South as professional instructors at Ivey’s still-under-development website. Unlike other players on Ivey’s roster, Dempsey’s addition to the mix was heralded on the website under the title of The British are Coming, with a brief description of his accomplishments. The only other pro to be featured at IveyPoker.com is Merson, who talks about his win at the 2012 WSOP Main Event via a video. The Main Event final table played to its conclusion just over three weeks ago, lasting a record 399 hands.

The emergence of IveyPoker.com has been widely discussed in the poker community. Many posters at online poker forums are curious as to how much of a role Ivey actually will play in the website. Some are of the opinion that the eight-time WSOP bracelet winner is merely lending his well-recognized name to the project, while others believe that Ivey has taken the helm of the website’s operation. According to comments Ivey made to ESPN last month, the world’s best all-around player will have quite a presence in achieving the site’s aims.

I want to teach the world how to play better poker, Ivey said. It’d be nice to teach people how to play the correct way.

IveyPoker.com is accepting player sign-ups that will allow those who partake to be made aware of updates pertaining to the actual launch of the site. Bonus chips will also be given to those who register early at the site for use when the free-play games are up and running.