Phil Ivey will not play WSOP 2011 because of being deeply disappointed and embarrassed that Full Tilt’s US players have not been paid since ‘Black Friday’. 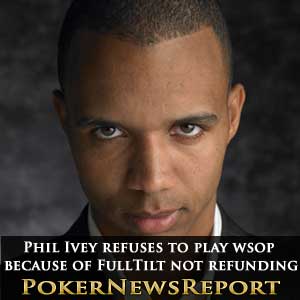 The World Series of Poker (WSOP) of 2011 kicked off yesterday, but the big story wasn’t how many players will turn up for the 42nd staging of the world’s biggest poker tournament – or even how the first few events panned out. No, it was all about one poker player who won’t grace the tables of the Rio All-Suite Hotel & Casino in Las Vegas this year – and that man is superstar Phil Ivey.

The Californian – who has eight WSOP bracelets – has decided to skip this summer’s event after he “electronically filed a lawsuit against Tiltware related to the unsettled player accounts” – or so said a rather large statement released last night on the 35-year-old’s official Facebook page.

Not long after that statement was posted, another, more straightforward, release was published on Ivey’s own website, philivey.com.

There has been no further statement from Ivey, or the many other Full Tilt Pros who arrived for day one of the $25,000 heads-up event in Vegas, with several saying they had no idea he was planning to release such devastating news as the WSOP 2011 got underway.

However, Ivey also said that he was “deeply disappointed and embarrassed” that Full Tilt’s American players have as yet not been paid since the events of ‘Black Friday’ on April 15, when three online poker sites – Full Tilt, PokerStars and Absolute Poker – were shut down by the Department of Justice (DoJ) on charges of illegal gambling, money laundering and bank fraud.

Additionally, Ivey feels “equally embarrassed” that “many players cannot compete in tournaments and have suffered economic harm”, so reckons that it’s only right that he also does not attend the WSOP “as I do not believe it is fair that I compete when others cannot”.

Ivey also stated that he is “doing everything” in his powers to “seek a solution to the problem as quickly as possible”.

PokerStars have, of course, reached an agreement with the DoJ and are now returning funds to players. However, Full Tilt have so far not followed suit.

While some Full Tilt accounts have been unfrozen, they are still not accessible to Americans – and, with the online poker site announcing that “we still do not have a specific timeframe for this” release of funds, Ivey has apparently had enough.

As players settled in for the $25,000 Heads-Up Championship, the stunned participants had pretty well only one topic for discussion – and that was: Where is Phil Ivey?

Considered the world’s best poker player, he finally broke a six-week silence regarding ‘Black Friday’ with the following statement on his official website:

“For many years, I have been proud to call myself a poker player. This great sport has taken me to places I only imagined going and I have been blessed with much success. It is therefore with deep regret that I believe I am compelled to release the following statement.”

“I am deeply disappointed and embarrassed that Full Tilt players have not been paid money they are owed. I am equally embarrassed that as a result many players cannot compete in tournaments and have suffered economic harm. I am not playing in the World Series of Poker as I do not believe it is fair that I compete when others cannot. I am doing everything I can to seek a solution to the problem as quickly as possible.”

“My name and reputation have been dragged through the mud, through the inactivity and indecision of others and on behalf of all poker players I refuse to remain silent any longer. I have electronically filed a lawsuit against Tiltware related to the unsettled player accounts. As I am sure the public can imagine, this was not an easy decision for me.”

“I wholeheartedly refuse to accept non-action as to repayment of players funds and I am angered that people who have supported me throughout my career have been treated so poorly.”

“I sincerely hope this statement will ignite those capable of resolving the problems into immediate action and would like to clarify that until a solution is reached that cements the security of all players, both US and International, I will, as I have for the last six weeks, dedicate the entirety of my time and efforts to finding a solution for those who have been wronged by the painfully slow process of repayment.”