Phil Ivey has chosen Antonio Esfandiari, Daniel Negreanu, Phil Hellmuth and Greg Merson to be his teammates in this year’s Caesars Cup competition. 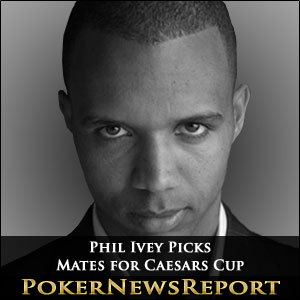 Phil Ivey has chosen Antonio Esfandiari, Daniel Negreanu, Phil Hellmuth and Greg Merson to be his teammates in this year’s Caesars Cup competition.

Ivey is captain of Team America, which will square off against Team Europe and Team Asia Pacific on April 14 at the Crown Casino in Melbourne, Australia in conjunction with the WSOP APAC. The Caesars Cup has been a popular event in recent years that pitted an American team against a European squad of pro players. The 2013 edition will feature three teams for the first time, as players representing Asia will also participate as a team.

Sam Trickett is the captain of Team Europe and has not yet announced his four teammates. Joe Hachem, winner of the 2005 WSOP Main Event, will captain the Asia Pacific squad. Hachem was born in Lebanon, but he and his family moved to Australia when he was six years old. Hachem is accepting suggestions from fans via Twitter for his five-player team.

Ivey’s selections as teammates come as no surprise. Antonio Esfandiari is poker’s all-time tournament money winner, having amassed over $23 million in his career. The bulk of that total came in last year’s $1 million buy-in Big One for One Drop when “The Magician” bested the field and earned $18.3 million. Esfandiari has three WSOP bracelets and two World Poker Tour titles on his resume. He recently signed on as brand ambassador with Ultimate Poker, making history as the first pro player to represent a fully-licensed U.S. online poker company.

Phil Hellmuth, of course, leads the world in winning WSOP bracelets. The “Poker Brat” won his 13th at the WSOPE Main Event last year, becoming the first player to win WSOP Main Event titles in the USA and Europe.

Greg Merson won the 2012 WSOP Main Event, taking home more than $8.5 million. The Maryland native has also been named to the pro roster at IveyPoker.com. The coaching and training site established by Ivey, who many consider to be the best all-around poker player in the game today, has yet to officially launch. Perhaps after Ivey’s Team America disposes of Team Europe and Team Asia in the 2013 Caesars Cup, Ivey can devote his attention to launching his much-publicized training website.