It was a case of another final, another near-miss for superstar Phil Ivey as he tries to bag his ninth World Series of Poker gold bracelet in Las Vegas. 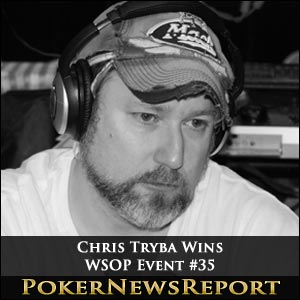 It was a case of another final, another near-miss for superstar Phil Ivey as he tries to bag his ninth World Series of Poker gold bracelet in Las Vegas.

Just nine players made it through Day 2 – from an original field of 393 – of the $2,500 buy-in Mixed Hold’em (Limit/No-Limit) event #35 to challenge for the bracelet on Day 3, but it was Vegas’ Chris Tryba who emerged victorious for a $210,107 pay day after he defeated Canadian Erik Cajelais in their one-hand heads-up encounter.

However, while Ivey will have been disappointed to have exited in eighth place for $21,699, the Vegas-based star equalled the record for final table appearances at five in a single series while also moving atop the WSOP Player of the Year leaderboard on 539.70 points – or just 15.45 ahead of second placed John Monnette (524.25).

The one great letdown for organisers, though, was the field size. Last year’s event attracted 580 starters, only for this year’s tournament to fall by over 32% with its 187 fewer competitors – although many of the game’s biggest stars did line up on Day 1, including the likes of Ivey, Antonio Esfandiari, Daniel Negreanu, Barry Greenstein, Huck Seed and Dan Harrington.

Additionally, railbirds also got to see some exciting poker as this event played out over three days.

Incredibly, it took just one hand of No-Limit Hold’em to give us a winner from the head-to-head between Tryba and Cajelais.

Cajelais and Tryba saw a Q♦ 9♣ 4♠ flop after the former had raised from the button and big blind Tryba had called. Tryba then checked and Quebec’s Cajelais bet 45,000, with the former making the call to see the J♦ arrive on the turn.

Tryba checked once again and Cajelais fired in a bet of about 130,000. No surprise, Tryba again called ahead of the 8♦ river. However, Tryba changed his tactics now, firing in 250,000, which saw Cajelais take his time before raising all-in – to be snap-called by an excited Tryba, who showed 10♦ 9♦ for an invincible straight flush.

Cajelais revealed K♥ 10♠ for a king-high straight, but was out in second place for $129,766 as he just missed out on a bracelet double.

All the while, Tryba was jumping about for joy and celebrating his first gold bracelet success with family and friends.

Michael Foti Out in Ninth

The third and final day at the Rio All-Suite Hotel & Casino started with the elimination of Oregon’s Michael Foti in ninth place for $16,692 during a hand of No-Limit Hold’em.

Eight-time bracelet winner Ivey was next to go in eighth place for $21,699 – also during a hand of No-Limit Hold’em.

The 36-year-old had been left crippled a few hands earlier and decided to stick in his last 7,000 from under the gun. Action folded around to button Michael Gathy and he made the call. Small blind Joep van den Bijgaart, of the Netherlands, also called, while big blind Cajelais checked.

The trio of active players checked down a board that read A♣ 8♣ 6♠ 9♠ 7♠ before the cards were turned over, with Ivey saying: I looked at an ace. It was the last thing he said at this table, however, as his A♦ 3♦ for top pair could not beat Cajelais’ two pair from his 7♣ 6♥ hole cards.

Illinois’ Brent Wheeler hit the rail in seventh place for $28,494 during another hand of No-Limit Hold’em. New Mexico’s Samuel Golbuff raised to 25,000 and Wheeler, in the hijack seat, tanked before shoving for 161,000. Action folded around to Golbuff, who asked for a count before calling, although he was only left with 155,000 chips.

Wheeler showed A♠ K♦ to dominate the K♠ Q♣ of Golbuff and looked all set to double-up when a 9♠ 9♣ 2♣ flop arrived. The 7♦ changed nothing, but the Q♠ on the river handed Golbuff top pair for the elimination.

Less than 15 minutes later, we were down to four players as Gathy crashed out in fifth place for $50,640 during a No-Limit Hold’em hand – halting the Dutch player’s hopes of adding a second gold bracelet from one series after he won the $1,000 buy-in No-Limit Hold’em event #21 for $440,829 last week.

Gathy fell just short after his Q♠ J♥ lost out to UK-based American Salman Behbehani’s 6♣ 6♥ when all the chips hit the middle pre-flop. The 10♠ 7♦ 7♥ kept Behbehani ahead, while the 7♣ turn and 4♠ river ensured that he improved to a full house for the knockout.

Start-of-day chip leader Van den Bijgaart hit the rail in fourth place for $68,576 during a round of Limit Hold’em. Under the gun, Cajelais raised before big blind Van den Bijgaart re-raised to get a call from Cajelais.

Behbehani bet 65,000 and Tryba called for the 2♠ to arrive on the turn. Behbehani led out once more for 85,000 and Tryba again made the call for the 2♥ to complete the board. Behbehani moved all-in for his remaining 300,000 chips and was instantly called by Tryba, who showed A♠ 2♣ for runner-runner trip deuces.

Jesus Christ, was all Behbehani managed to say as he showed K♠ Q♣ for two pair, queens and deuces, before heading off to the rail.