Phil Ivey just missed out on collecting his ninth World Series of Poker (WSOP) bracelet after a thrilling three-handed encounter in event #24 in Las Vegas. 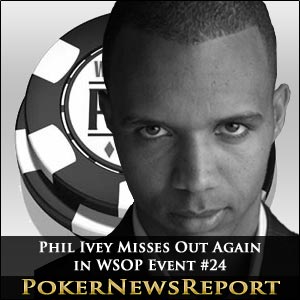 Phil Ivey just missed out on collecting his ninth World Series of Poker (WSOP) bracelet after a thrilling three-handed encounter in event #24 in Las Vegas.

However, the 36-year-old – who is based in Vegas – will be seriously disappointed with this outcome as he aims to close the gap on 12-time bracelet winner Phil Hellmuth.

Three Final Tables, But No Bracelet

That’s three final table appearances within slightly more than a week for Phil Ivey without success after he also picked up $34,595 for finishing seventh in the $5,000 buy-in Seven-Card Stud Hi-Lo Split-8 or Better event #15. So expect many more determined displays from the superstar between now and the conclusion of the 43rd annual series at the Rio All-Suite Hotel & Casino.

In case you’re wondering – and why wouldn’t you? – two players are still alive in this latest event, with Joe Cassidy and Scotty Nguyen preparing to start their heads-up battle later today in the Rio’s Amazon Room for the $294,777 top prize, as well as that gold bracelet.

2011 Winner Viacheslav Zhukov Out in 17th

Defending champ Viacheslav Zhukov, of Russia, stayed in contention for quite some time, but eventually crashed out in 17th place for $13,031. Thereafter, several other big-name pros hit the rail before the nine-handed final table was established, including Pennsylvania’s Brian Hastings (16th for $13,031), Pasadena’s Brendan Taylor (13th for $16,544), Maryland’s Dan Kelly (12th for $21,020) and Arizona’s Mike Wattel (11th for $21,020).

Cassidy began the final table as chip leader, although Ivey was close behind – with these two players accounting for approximately half the chips. There were still some other dangerous players in contention, too, including Nguyen, Hollywood’s Bart Hanson and Nevada-based Mike ‘The Mouth’ Matusow.

It looked as though Ivey would run away from the others at one point, but – after a break – he seemed to lose all momentum to quickly drop down to only a few hundred thousand. However, Ivey somehow stayed in contention by winning some unexpected pots.

Ivey dropped away again after that hand, but fought back to move above 800,000 chips – only to see his run at gold bracelet glory end when all-in against Cassidy on a flop of Q♥ J♣ 8♦.

A very tired Nguyen was keen to end play for the day, although Cassidy insisted they should continue. However, with no agreement, it was decided that they should return today – with Cassidy on three million and Nguyen holding 845,000 as the blinds begin at 50,000/100,000.