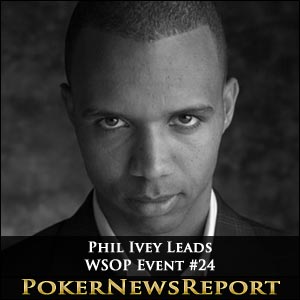 Phil Ivey is once again in a great position to add to his World Series of Poker (WSOP) bracelet collection after ending Day 2 of event #24 as chip leader.

The eight-time champion – who has already made two final tables at this series – will aim to better his runner-up spot in event #17 the other day by taking down the $5,000 buy-in Omaha Hi-Lo Split 8-or-Better tournament after the field was reduced to 27 from the original 256.

Day 2 started out with 187 survivors in the Rio All-Suite Hotel & Casino’s Amazon Room aiming to collect the $294,777 top prize – as well as gold bracelet, of course – but only those lining up today will be paid after the money bubble was burst when Englishman James ‘Flushy’ Dempsey hit the rail in 28th place.

One-time bracelet winner Dempsey certainly crashed out in glorious fashion when committing all his chips on a 2♣ 2♦ 2♠ board. Unfortunately, California’s Bart Hanson had the 2♥ in his hand, so sending Dempsey to the rail and guaranteeing all today’s players of at least $10,348 from the $1,203,200 prize pool.