Phil Ivey, arguably poker’s best all-around player, has launched an instructional website with the goal of helping fellow players to improve their game. 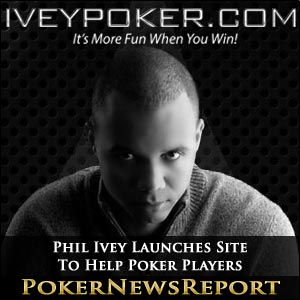 Phil Ivey, arguably poker’s best all-around player, has launched an instructional website with the goal of helping fellow players to improve their game.

With eight World Series of Poker gold bracelets and more than $17 million won in live tournaments on his resume, Ivey established IveyPoker.com as a way to assist players in learning to play poker correctly and successfully.

I want to teach the world how to play better poker, Ivey said to ESPN Playbook. I feel like there’s a big hole in the poker community. I speak with people all the time about poker, and people say they’d love to learn how to play but they don’t know where to start. It’d be nice to teach people how to play the correct way.

The new site went online over the weekend and will soon provide video instruction free-of-charge to any players interested in getting better at playing poker. Ivey won’t be the only pro giving lessons at the new site, as he has already recruited top pros Patrik Antonius, Jennifer Harmon and 2012 WSOP Main Event Octo-Niner Greg Merson to also impart their wisdom on successful poker strategy. Other pros will be added to the mix, provided they meet the lofty standards that Ivey demands.

Ivey was a Full Tilt sponsored pro and was disheartened by having his name attached to a company that was mismanaged and run into the ground. He attempted to distance himself from the Full Tilt fiasco by filing suit against parent company Tiltware and seeking a release from his contractual obligations. Ivey cited the fact that Full Tilt executives failed to heed the warnings of U.S. attorneys that the online poker site was operating illegally. Ivey was recently criticized by Howard Lederer–the poker community’s most hated man according to online poker forums–who said that Ivey’s lawsuit contributed to Full Tilt’s demise. Ivey plans to eventually address the Full Tilt issue via his website when he feels it appropriate to do so.

There’s a lot I’d like to say to all of the poker players who were on that site, Ivey said. But unfortunately, given the legal ramifications, I’m still unable to comment on it. However, when the time is right — and it should be soon — I look forward to all the questions.

IveyPoker.com is now accepting player sign-ups that offer the reward of free points that can be used on a Phil Ivey poker game that is scheduled for an upcoming release. No announcement has been made as to when the site will begin free poker instructions.